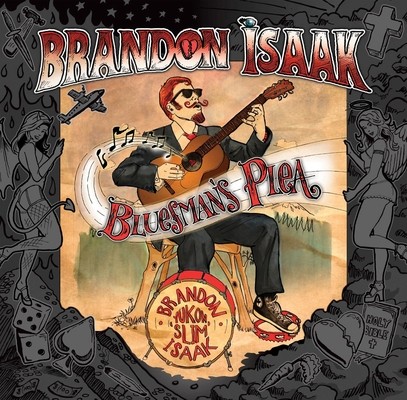 Brandon Isaak is a roots-based Canadian artist with some strong things to say, and an old school blues way of saying it, floating from a country blues, “Mississippi Sheiks” style, to Gospel, Piedmont and beyond. His latest album Bluesman’s Plea consists of 14 original tracks. Before this album landed in our inbox, we were unfamiliar with Isaak. The initial listen to the album, however, was a pleasing, entertaining, and memorable experience.

Plea kicks off with some finger picking Delta Blues on the title track. Brandon is a skilled songwriter, fitting just the right amount of words and all-important spacing into each track, letting the instruments do the talking when necessary. A catchy, repetitive track, “You Gotta Pray” is a simple joy. “Take My Message” has a traditional Southern Gospel feel, complete with a choir on the chorus. The track would be fully at home nestled in between “Old Time Religion” and “Will the Circle Remain Unbroken”.

Overall, Bluesman’s Plea is an album that shows off a range of traditionally pre-war styles with skilled & interesting lyrics. Fans of the Mississippi Sheiks or the contemporary one-man-band master Ben Prestage will certainly find enjoyment in this album. It is hard to get a handle on Brandon’s voice — occasionally smooth, occasionally twangy, occasionally rough. There is the occasional out-of-place track such as “A Little Wine”, and Isaak occasionally relies a little heavily on samples — though with the wide ability he obviously has, he certainly doesn’t need to. Ultimately, the bulk of the album is faithfully steeped in the traditional style that is simply a joy to experience.