Blues in Turkey — an Interview with Öncü GreyWolf 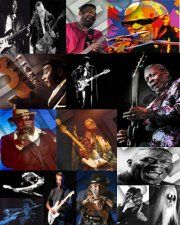 We recently sat down with Öncü GreyWolf, an accomplished TV Chef from Turkey and the creator of the widely popular “Blues” fanpage on Facebook. We wanted to get a deeper impression of the blues global reach from someone with their finger on the pulse.

Öncü, you founded the very popular “Blues” fan page, correct? How long ago? And how did it grow so big!?

I founded by Blues Fan Page in 2007 or 2008. But the first time I only had my “Blueser” friends. I wait long time. Maybe one or two years. When I changed our pages pictures, everyone wanted to come! It was March 29, 2008. Then many people came and shared more videos. Facebook then closed my account for 5 months, but I can’t give up Blues! Next time I talk with the FB team, they re-opened my account. Then I said “If I’m back to FB: Blues Blues Blues…”. I shared out page’s link to all music pages, all over facebook. So everyone saw our page. The page flew over the last year. One year ago we had 30,000 fans but now, we have over 70,000 blues fans!

You live in Turkey? Correct? Can you tell me about being a blues fan in Turkey? Are there very many blues fans there? Is the blues popular?

Yes I’m live in Türkiye. So many people like to listen to Blues! We have two or three Türks Blues Fests. It was Efes Pilsen Blues Fest is the best and a favorite fest for Türkiye. Taksim / Beyoğlu and Kadıköy happen more in Blues cafe or bars. Universty students playing guitar come every year to universty fest. Yavuz ÇETİN (R.I.P.) is our “buddha” to Türks Blues. And http://www.istanblues.org/ is our best Blues web site. A lot of people are going to Europe or the U.S. for blues fests as well. We don’t know who they are.

Do many contemporary blues musicians and artists visit Turkey? If so, who has visited lately? And who do you enjoy listening to!?

Efes Pilsen BLUES FEST calls for the best singer. 84 groups, 256 artists, 338 concerts in 21 years. And other organisations host guest singers. However, because of the planned terrorist attacks in our country on the 22nd, Efes Blues Festival has been canceled At the 22nd. festival, we had some of New York’s most established blues musicians, the fest is only 5 years old, and has some of the same musicians that play The Tonight Show and The Ed Sullivan Show programs on stage for years, Lucky Peterson, San Francisco harmonica master Rick Estrin and the Nightcats, The school of the Mississippi John Mooney, representing the most important artists… The 21st. festival had Kenny Neal, Mitch Woods & His Rocket 88s, and Samuel James joined. They visited 20 city. This is an organization that was much loved by those who don’t even know the Blues. Our country is dealing with terrorism, and we would like to respond to it with the Blues. Peace for peace in the entire world …and we need to listen to Blues.