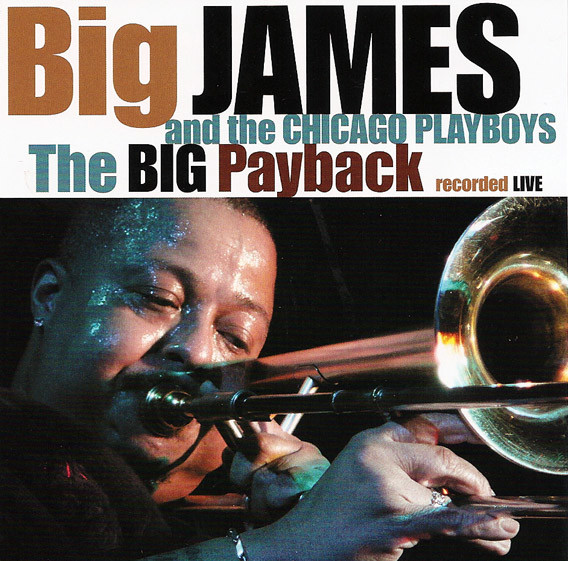 Big James and the Chicago Playboys‘ album The Big Payback, due out tomorrow through the prolific Blind Pig label is a full helping of horn-driven funk and blues. “I been around the world… goin’ from town to town singin’ these funky blues and I love it!” bellows Big James on the first track, live from Paris, France. The band is tight, the music is hot, and the horns are heavy.

The band boldly titles the album after a James Brown track, “The Big Payback”, which makes a statement about the strength of the band’s funk abilities. Fortunately, the title track doesn’t disappoint as the Playboys dish out a serious helping of funk. “All Your Love”, a track pend and made famous by the late, great Magic Sam, is a great Chicago shuffle, and Big James’ vocals are wonderfully suited to the track. “Low Down Dirty Blues” is one of two original songs penned by James. “Dirty Blues” lays down the blues as only a Chicago band can. The end track, an instrumental cover of “Smoke on the Water” was a bit of a shock in the soul, blues, and funk-driven record. The band quickly owns it as Mike “Money” Wheeler’s stinging guitar, followed by the powering horn section. It was a fitting chance for the band to have some fun and give a two and a half minute showcase, though it was in slightly odd company with the rest of the tracks. However, the way the crowd exploded when they played the first seven notes might speak otherwise.

Overall, this album is a great an energetic performance, showing the well-honed band’s skills and bringing a unique blend of fine entertaining music. The Chicago Playboys are a horn-based, soul-driven funk band in the truest sense of the word, with trombone, trumpet, and bass guitar taking front-and-center stage. The soul styling of Money Wheeler on the guitar helps out round out the soul, and Big James’ smokey vocals brings the blues. James on trombone with Charles “Richard” Pryor on trumpet create a tight, hot brass section. Larry “L-Dub” Williams is a skilled funk bassist — arguably one of the most important factors in a successful funk band. Joe “Goldie” Blocker takes the keyboards and Cleo Cole tears up the skins. The band is the perfect size — just large enough to sound fat and just small enough to keep from sounding too busy.