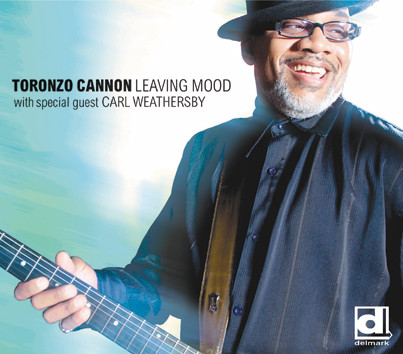 Having grown up on the south side of Chicago in the Fuller Park area, due south of the Eisenhower on 90, a few blocks east to the area where Theresa’s Lounge was, at 4801 Indiana Ave., Toronzo was exposed to blues early and often. Listening to his CD Leaving Mood, released through Delmark Records, is a bus ride through the life, people and events of one of Chicago’s rising and talented blues stars.

Like a south side neighborhood, this bus tour of the blues has both nice areas, and some a little more stark. The starker realities of life are no stranger to Toronzo Cannon, and he puts his insights to good use. Songs like She Loved Me, Chico’s Song, a happy “hurt to the heart tribute to Vernon banks, Open Letter(To Whom It May Concern), You’re a Good Woman and Leaving Mood depict the realities of life: the jail, the blues life, broken relationships, and death.  The musicians so capably backing Cannon are rhythm guitarist Lawrence Gladney, who contributed two songs and co-authored with Cannon seven others, Russel Purifoy on keyboards, Larry Williams on bass, Marty Binder on guitar, Matthew Skoller on harmonica, and on two songs Carl Weathersby playing lead guitar. There is a range of sounds, from the boogie woogie piano in Chico’s Song, the muffled mic vocals of Open Letter, and the hip moving bass of Do I Move You?

There are some nice parts of town on the Toronzo Cannon route. Lawrence Gladney’s  Come On.  We travel past two Cannon/Gladney collaborations, I Believe, and Hard Luck. In Hard Luck, the tempo slows down, and the Chicago slow, ballad style emerges with Carl Weathersby helping out on lead guitar on this typical blues, “I am so down on my luck” song.  We also go by I Can’t Take Her Nowhere, a bluesy date from hell song. A song where a date pukes!  Do I Move You has one of those bass lines that will get the dance floor filled with close moving bodies. Ah, good lovin’! Baby Girl, another typical man loses woman song, with organ supporting the guitar in this tune.  Earnestine is the contrast, with the title woman capturing the singers interest in this basic rocking blues tune. This part of town closes out with a cover of the Mike Wheeler tune, Not Gonna Worry. In this medium tempo tune featuring the basic sound of Cannon on this CD, a richly textured mix of keyboard and guitar with a strong rhythm section.

One might expect that a man who sees what Toronzo Cannon sees, and the influence of south side Chicago might make a man sullen, mean, depressed. And in some it does.  Not Toronzo Cannon. Bob Koester of Delmark Records said of Toronzo, “He’s really a sweet guy,” and it’s reflected in the audio following “Chico’s Song,” a clip where Toronzo laughs, then says, “That was bad man. Fo sho”

Fo Sho indeed. On this CD Toronzo drives us around the stuff of his life, adding all the musical talent he’s got to his stories. This is Chicago blues, today’s Chicago, as good as it gets. And though he still drives a bus between gigs, it’s high time that Toronzo Cannon drove down the full time blues route, coming to a city near you.