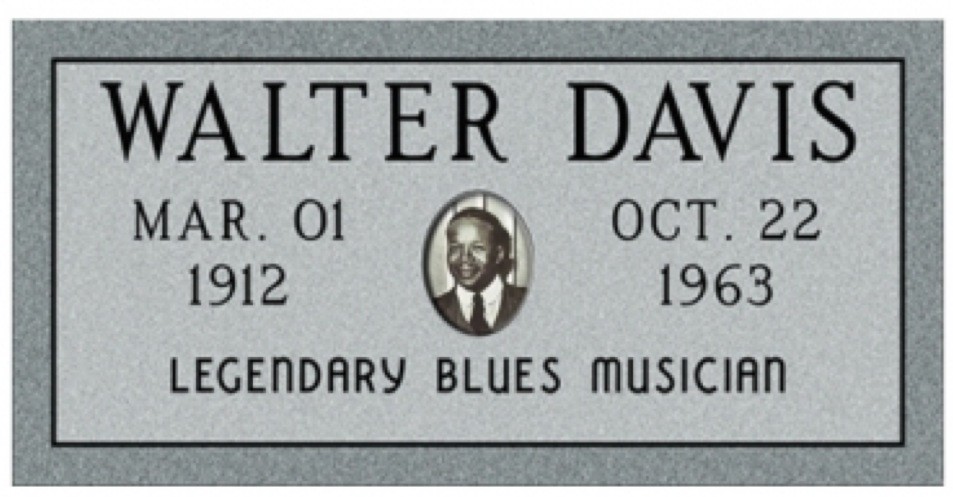 Blues Hall of Fame inductee and St. Louisan Walter Davis is finally receiving his due reverence in the form of a headstone marking his previously unlabeled grave.

The pianist, composer, and singer, one of the most influential and prolific players of the pre-World War II blues scene, is the first beneficiary of a partnership between non-profit groups Killer Blues Headstone Project and Friends of Greenwood Cemetery Association. A ceremony and unveiling will take place 1pm October 21, 2012 at Greenwood Cemetery in Hillsdale, MO.

Born in Grenada, MS in 1912, Davis recorded more sides between 1927 and 1953 than all but a few of his contemporaries. He began performing professionally in the late 1920s, recorded his seminal “Sunnyland Blues” in 1931, and continued as an itinerant musician until suffering a stroke in the early 1950s. Removed from the music scene, he became a preacher and found employment at the Calumet and Albany hotels in St. Louis, MO. Following his death in 1963 Davis was interred in Greenwood Cemetery in an unmarked location. He was welcomed posthumously into the Blues Hall of Fame in 2005.

Mr. Davis’s marker is the eleventh gravestone financed, provided, and laid by Killer Blues, an organization with members in Michigan and Missouri. In 2012 the group has also delivered headstones to the unmarked resting spots of Richard “Hacksaw” Harney, Johnny “Daddy Stovepipe” Watson, and Leroy “Baby Face” Foster. Eddie King will be the next bluesman to receive this much deserved recognition.

Killer Blues recently began working with Ms. Etta Daniels and the Friends of Greenwood Cemetery to facilitate the removal of overgrowth covering much of the historic and neglected African American cemetery. For more information or to donate time or resources to this cause please contact Ms. Daniels at (314) 772-7466 or at [email protected] Information on all of the Killer Blues Headstone Project’s past and planned endeavors (and ways to donate toward future endeavors) can be found online at www.killerblues.net or by contacting Aaron Pritchard at (314)775-6953 or at [email protected]