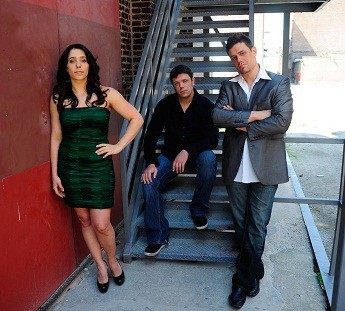 Kansas City blues trio Trampled Under Foot recently launched a Kickstarter campaign to raise money to record, manufacture and release their next album. Over the years, the trio has toured the world building a loyal fan base and has decided to get their fans more involved in the creation of the next album. It’s been two years since the release of their highly acclaimed album Wrong Side of the Blues, produced by Tony Braunagel (Robert Cray Band, Taj Mahal) and the band is anxious to get back into the studio. The release gained TUF international recognition and earned them multiple awards, including nominations for ‘Band of the Year’ at the 2012 Blues Music Awards and 2012 Blues Blast Music Awards, as well as ‘Blues Song of the Year’ nomination for the powerful single “Goodbye” at the 2011 Independent Music Awards. Braunagel will once again team up with the trio on the new album, which will blend TUF’s traditional blues sound with funk, roots rock and R&B.

Trampled Under Foot decided to launch their Kickstarter campaign, in lieu of securing a record deal, to strengthen the relationship between the band and their devoted fan base. Kickstarter, the well-known online crowd funding platform, gives artists the opportunity to reward their fans in exchange for monetary pledges. Some of the rewards for TUF’s campaign include: having your name listed in the credits of the new album, a custom cigar box guitar handmade by guitarist Nick and autographed by TUF, an afternoon fishing trip with the band and many more. “The most exciting part of using Kickstarter is it gives us the chance to show our appreciation to our fans for their support in a more personal and meaningful way,” says bass player Danielle Schnebelen. Pledges will be used to cover recording costs and help pay for the manufacturing, marketing and promotion of the new album. Please watch their story and join Trampled Under Foot in their quest to record their next album at http://www.kickstarter.com/projects/tufkc/new-trampled-under-foot-album.