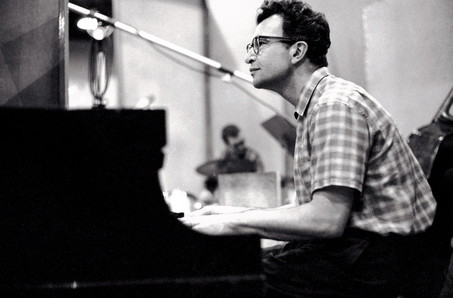 One day short of his 92nd birthday Dave Brubek has died of heart failure, on the way to a regular treatment with his cardiologist,” said Gloyd. Chicago Tribune confirms that, Dave Brubeck, a jazz musician who attained pop-star acclaim with recordings such as “Take Five” and “Blue Rondo a la Turk,” died Wednesday morning at Norwalk Hospital, in Norwalk, Conn., said his longtime manager-producer-conductor Russell Gloyd.

On November 8, 1954, Dave Brubeck made the cover of Time magazine.  The article featuring him was entitled The Man on Cloud No. 7.  His career took off from that moment forward.

Throughout his career, Brubeck defied conventions long imposed on jazz musicians. The tricky meters he played in “Take Five” and other works transcended standard conceptions of swing rhythm.

As a humanist, he was at the forefront of integration, playing black jazz clubs throughout the deep South in the ’50s, a point of pride for him. Dave Brubeck was one of the first bandleaders in America to integrate his group.  African American bassist, Eugene Wright, joined the band in 1958.  Many clubs canceled scheduled appearances because of the group’s mixed race identity.  At one point, Brubeck canceled a television appearance when he learned that the producers intended to keep Wright off-camera.

He is survived by his wife, Iola; four sons and a daughter; grandsons and a great granddaughter.