Debbie Davies – After The Fall 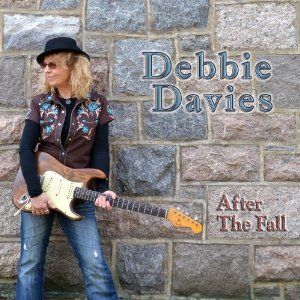 Everyone knows Debbie Davies. Over the years she has established a standard of excellence for others to follow when it comes to blues guitar. She was fortunate enough to have played with Albert Collins and although his influence is apparent, she still makes songs her own. She has also played with and/or recorded with the likes of John Mayall, Duke Robillard, Peter Green, Mick Taylor and Tab Benoit (to name just a few).

After The Fall is Debbie’s 11th solo album, on the MC-Records label. Personnel are: Debbie Davies, lead & rhythm guitars, and vocals; Don Castagno, drums; Matt Lindsey on bass,; Scott Hornick, bass; Bruce Katz on B3 organ; Dave Gross on rhythm guitar (2nd lead on “Done Sold Everything”, bass on “Don’t Put The Blame On Me” and percussion). On “Don’t Put The Blame On Me” Michael Bram plays drums, and Jeremy Bram plays B3 and piano. This album well played. Performances are relaxed, and the playing is loose, but never messy. The other thing that becomes clear is that her playing is controlled, but never contrived. It has a light, joyful, unhurried quality. Standout cuts are scattered throughout, starting with the opener, “Don’t Put The Blame On Me”, which is a foot-tapping honky-tonk. “The Fall” (co-written by Davies and Castagno), has a great backbeat, nice lead playing, and the organ backdrop is perfect. “True Blue Fool” (also co-written by Davies and Castagno), is slow and mellow with some nice chording and a nice lead run. “Done Sold Everything” is a shuffle, and you can hear Collins’ influence; a nicely played piece.

The best cut on this album is “Little Broken Wing”: The playing is spacious and airy, soft, with a lot of texture. “All Of My Forgiveness” is another mellow blues with stunning guitar tone, and again, great lead playing. “R.R. Boogie” is just a jamming romp! The album closes with “Google Me Baby”, which is playful and sounds like a cool 1940’s tune – really well done. The level of musicianship on this album is excellent. The production and sound quality are very good and give the album a very relaxed, warm quality. This is a great album to play along with, or sit and enjoy with a good beer (or both).

Buy After The Fall