Ann Rabson, of Saffire – The Uppity Blues Women Passes Away 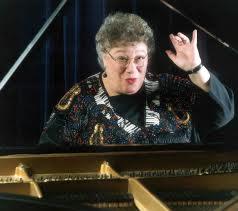 Blues pianist/singer/songwriter/guitarist Ann Rabson died on Wednesday, January 30, 2013 in Fredericksburg, Virginia after a long battle with cancer. She was 67. Co-founder of the hugely successful trio Saffire–The Uppity Blues Women, Rabson was a legendary force on the keyboards as well as being a deeply soulful vocalist. She recorded eight albums with Saffire and one solo CD for Alligator Records, and released three solo albums for other labels. Her most recent was 2012’s Not Alone (VizzTone Records). Rabson’s prodigious talent, along with her take-no-guff attitude, struck a chord with music fans around the world. Considered one of the finest barrelhouse blues pianists of her generation, Rabson — an accomplished guitarist since she was a teen — didn’t start playing piano until she was 35. DownBeat magazine said that “Rabson plays bluesy, honky-tonk piano with staggering authority.”

Alligator president Bruce Iglauer, Rabson’s long-time friend and producer, says Ann was a driving force in the blues world. “Our dear friend Ann Rabson was an extraordinary blues singer, pianist and guitarist and a delightful, smart and funny person. As a founding member of Saffire–The Uppity Blues Women, a solo recording artist and a live performer, she brought her talent, intelligence and intense love for the blues tradition to every piece of music she played and sang. Ann never gave her music or the rest of her life less than 100% of her commitment. She was a loyal friend, a dedicated champion of the blues, a loving partner to her husband George, and an unforgettable woman. We were blessed to have known her.”

Rabson was born in New York on April 12, 1945 and raised in Ohio. As a child she was touched by the blues. “Blues speaks to me directly. It wasn’t a choice, I was drawn to it naturally, sort of like a sheepdog with sheep,” she said. She received a guitar from her father when she was 17 and found role models in Big Bill Broonzy and Memphis Minnie, one of the few early female blues guitarists. Ann quickly became an accomplished guitar player and first sang professionally while still in high school. By age 18 she was performing around the Midwest. In 1971, Ann moved with her daughter to Fredericksburg, Virginia, where she performed full-time and gave music lessons on the side. During this time, Ann and her guitar student, Gaye Adegbalola, decided to perform together and the seeds of Saffire–The Uppity Blues Women were sown.

They pooled their money and recorded a demo tape, which they then forwarded to Alligator Records. Their 1990 self-titled debut became one of the label’s best-selling releases. With the addition of Andra Faye McIntosh in 1992, the trio continued to win over audiences around the world with their wholly original and captivating albums and joyous live performances. Their recordings for Alligator are among the best-selling in the label’s catalog. Ann released her first solo album, Music Makin’ Mama, in 1997. When Saffire–The Uppity Blues Women disbanded after 25 years in 2009, Rabson recorded three solo albums and continued to perform solo and with friends, including guitarist Bob Margolin. She appeared on recordings for numerous artists, including Cephas & Wiggins, Pinetop Perkins, EG Kight and Ani DiFranco.

Information on funeral arrangements will be forthcoming.

“The blues world is sad to lose one of our bright lights. Ann Rabson passed at home in her sleep after years of quiet strength against deadly affliction. She knew it was coming and lived her life to its fullest. She loved to play blues for people more than anyone I ever knew, anyone! In 2012 our intense collaboration on recordings and shows together and hard road trips was deliberate and spirited. She gave Death the finger as long as she could, and gave Life ten fingers on her piano. Personally, Ann Rabson was a big sister to me. Now I’m going to do what she would want, play some blues for her and celebrate her life and hold her in my heart forever. If you see me on a bandstand, and half-close your eyes, you’ll see her next to me.”