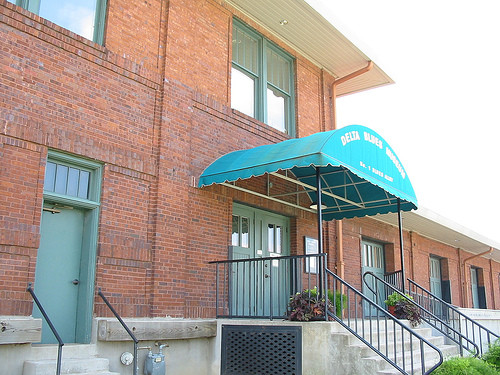 (WASHINGTON, D.C.) – The Institute of Museum and Library Services today announced Delta Blues Museum of Clarksdale, Miss., as one of 10 recipients of this year’s National Medal for Museum and Library Service. The nation’s highest honor conferred on museums and libraries for service to the community, the National Medal celebrates institutions that make a difference for individuals, families, and communities. The National Medal will be presented at a celebration in Washington, D.C. on May 8, 2013.

The blues is a vibrant, living, and uniquely American art form with deep roots in Coahoma County, Mississippi, and masterful expression from the artists who lived there. Many consider the distinctive Delta style the most elemental blues form. The Delta Blues Museum celebrates the history, showcases live performances, and nurtures the next generation of blues musicians. Participants in the museum’s popular music classes are from every segment of the community – ages five to over 60, and reflect diverse ethnic and economic backgrounds – and a travelling trunk exhibit inspires blues appreciation across the nation.

“Museums and libraries serve as centers for lifelong learning and as cornerstones for our communities. Not only is the Delta Blues Museum celebrating one of our country’s most fundamental genres of music, but they’re educating the next blues greats. We are proud to name Delta Blues Museum one of this year’s National Medal for Museum and Library Service winners,” said Susan Hildreth, director, Institute of Museum and Library Services. “This year’s National Medal recipients demonstrate the many ways museums and libraries alike build strong communities. These institutions are educating, inspiring, and leading lifelong learning while serving as community anchors.”

“Being a National Medal recipient will forever symbolize the important role the Delta Blues Museum plays in not only our local community but the global music community as a whole. I am honored to accept this award, the highest national honor bestowed upon museums and libraries for service,” said Shelley Ritter, executive director, Delta Blues Museum. “We anticipate this recognition will significantly enhance the Delta Blues Museum’s ability to honor our many talented blues musicians, to educate and engage future generations in our local, living contribution to the music world, and to preserve the history and heritage of our community and its vast contribution to this important American art form.”

Twenty-three-year-old Travis Calvin, who started playing the guitar at the museum when he was just eight years old and is now pursuing music as a career, will travel to Washington and share the impact the Delta Blues Museum has had on his life during the May 8 celebration.

This year’s honorees exemplify the nation’s great diversity of libraries and museums and include a science center, children’s museum, music museum, art museum, cultural museum, public libraries, and county library systems, hailing from seven states. Earlier this year, 33 institutions were announced as finalists for the National Medal, and community members were encouraged to share their stories about their experiences on the IMLS Facebook page.

Medal winners were selected from nationwide nominations of institutions that demonstrate innovative approaches to public service, exceeding the expected levels of community outreach. After the ceremony, StoryCorps – a national nonprofit dedicated to recording, preserving, and sharing the stories of Americans – will visit Delta Blues Museum to document stories from the community.