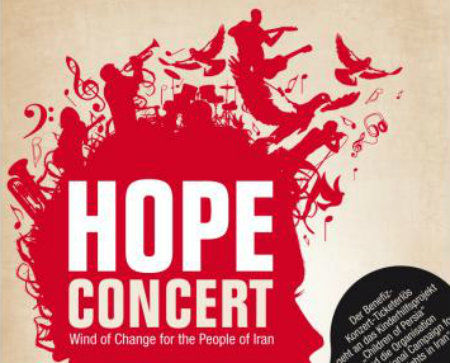 The new “Bluesman” Stephen Dale Petit has been added to the Hope Concert in Berlin, Germany at the Velodrom on June 7, 2013.

Petit will join Global stars Alanis Morissette, Natasha Bedingfield, DJ Steve Angello, and lead singer John Martin of the Swedish House Mafia, two of the most successful Iranian musicians Andy Madadian and Ebi, the Greek musician Alkistis Protopsalti, the co-founder and original guitarist of the band The Police Henry Padovani, the American songwriter Shani, the international singer Liel Kolet,  multi-cultural musician Valy Hedjasi, and the Greek pianist, producer and composer Yanni, will all perform at the HOPE Concert in solidarity with the Iranian people.

The legendary artist Stevie Wonder is also lending his support to the people of Iran and contributing his song “My Love.” Renowned music producer Humberto Gatica will produce the finale of the concert, in which all the musicians will raise their voices to perform Stevie Wonder’s song of unity, harmony, and peace.

The lineup of  international musicians will lend their voices to let the people of Iran know they are not alone in their struggle for human rights and freedom. In Iran, musicians of all genres including the blues—as well as artists, filmmakers, writers, and journalists—are not only regularly banned from working due to their political activities, they are routinely imprisoned and tortured.

The international lineup will be presented by Iranian-American journalist and peace activist Roxana Saberi, who was arrested in Iran in 2009 and freed after international outcry, will present the HOPE Concert at the Velodrom in Berlin in worldwide support for the Iranian people. The International Campaign for Human Rights in Iran welcomes this opportunity to raise awareness of the state of human rights in Iran and to add to the voices in solidarity with the Iranian people.

The goal of the HOPE Concert is to show worldwide support for the Iranian people, and to strengthen their voices on the international stage. The artists and the concert represent no political direction or views of political groupings, but stand independently for universal human rights, democracy, and peaceful coexistence. All proceeds from the tickets will be donated to the NGO Children of Persia to finance medical treatment for children in Iran, and to the International Campaign for Human Rights in Iran.