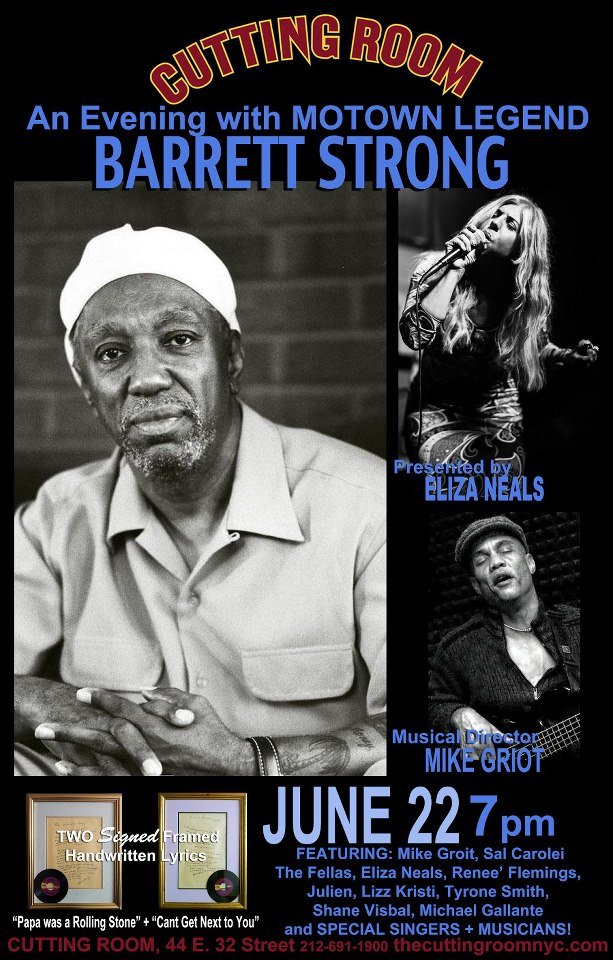 (NEW YORK CITY, NEW YORK) — The Cutting Room and recording artist Eliza Neals present a rare visit by the Motown legendary songwriter Barrett Strong, who co-wrote “Heard it Through the Grapevine,” “Papa Was a Rolling Stone, “Ball of Confusion,” “War”, and many more.

During the late ’60s and early ’70s, Mr.Strong collaborated with the late writer/producer Norman Whitfield on historic songs including “I Heard It Through the Grapevine,” “Too Busy Thinking About My Baby,” “Papa Was a Rolling Stone,” “Ball of Confusion,” “War,” “Just My Imagination,” “Smiling Faces Sometimes,” “Psychedelic Shack,” “I wish it would rain,” “Runaway Child, Runnin’ wild,” ‘Superstar,” “Message from a Black Man,” “Cloud Nine,” “That’s the Way Love Is,” “I Can’t Get Next to You,” ‘Wherever I Lay My Hat” plus so many others.

With ‘Motown The Musical’ on Broadway, now’s the time to celebrate and talk with one of the most iconic songwriters ever. In a time when songwriters are forgotten, Barrett Strong will be remembered for his staggering array of hits then and now. Mr. Strong himself will take the stage for an intimate ‘behind the music’ Q&A session where he will tell the stories behind the songs and talk about what it took to make it in the Motor City. To top off the night, one of a kind, handwritten signed lyrics of the songs “Papa was a Rolling Stone,” and “Can’t Get Next to You” with original signed 45s will be sold at the event.

All proceeds will go to Mr. Strong’s medical and living expenses.