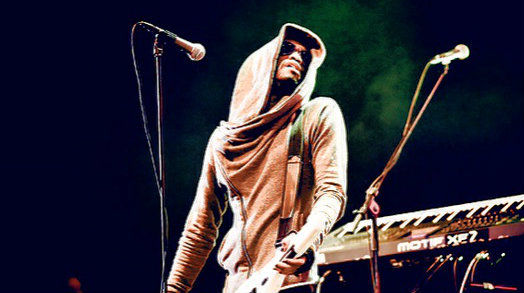 None of those names are typically associated with the blues music genre, so why is the most popular blues network in the world writing about artists who, on the surface, have nothing to do with the blues? Easy. We dug a little deeper into something on Twitter one night.

Tommy Joe retweeted one of our posts. We saw the retweet and wondered why someone with so many followers in the pop world was paying attention to the news leader of a niche genre. We investigated further and found out that Tommy has been a blues fan since before he was a teenager. We then stumbled across a song that Tommy had covered with Brian London. The song was, of course, “Woman Across The River” by the legendary Freddie King. After hearing it, the American Blues Scene staff knew these guys meant business — and they loved the blues almost as much as we do. As Brian tells us in the interview, he’s been listening to the blues his entire life.

The by-product of this seemingly unlikely relationship is that these guys are turning people onto the genre that built the foundation of American music, who have never heard the blues before… And guess what? Those people are really digging it! We’ve also found the guys to be absolutely awesome to talk to, especially about the music. Here’s our chat with Brian:

So what’s the life of Brian London like these days?

Just working on this album, me and Tommy are trying to get it finished up. We should be done soon.

So how long have you known Tommy?

Well I met Tommy about 3 years ago at the AMAs, he was playing with Adam and I was with Rihanna at the time. So that’s when I met him, but we didn’t start working together until February of last year.

So how did you and Tommy start playing together?

Well, we were playing together with Adam doing live shows for like the last year and a half… So after the tour ended, he hit me up and said we should write together. The first time we played we came up with “Let Me Blow Your Mind.” So that was our first time playing together, and then next thing you know, a few months later we had another one.

So you guys are just doing this project and play together when you aren’t on the road with the other artists that you play with?

Yeah, I also music direct for other artists as well. I’ve been home since the end of July, or the  beginning of August. That’s when we did our last show with Adam, in Paso Robles. So I’ve been here now, getting two music videos together that we just shot this past weekend. I’ve also been finishing the mixes of the rest of this album. So I’ve kind of had my hands in a lot of different pots lately, but it’s been cool.

Let’s shift gears a bit… Who’s idea was it to cover the Freddie King song?

Well, we both wanted to cover something, and we were thinking that we should do a Freddie King song. I said, “let’s do ‘Reconsider Baby'”. I thought, we can probably get away with doing that one and still be okay in terms of production, and how the drums were set up instead of ‘Woman Across The River’… But in the back of both of our minds, we really wanted to do “Woman Across The River”. We just didn’t know quite how to approach the different timing and the swing of the song. We were scared of it a little at first, until one day he came over and we had some Jameson. We just sat down and we hashed that stuff out. We recorded it right then. That’s pretty much how it happened, right there.

So the version on Soundcloud is from one evening?

Yes, that’s from one evening.  So now I just finished recording live drums for about half the album and will have that done by the end of next week. We just finished “Woman Across The River” and it sounds pretty cool, I think you’ll like it.

It’ll be full length, 11 songs and yeah. That song is going to be on there.

So let’s talk a little bit about you and then we’ll come back to the CD. How long have you been into the blues?

Well, ever since last summer I’ve been listening to a lot of different types of music because Adam [Lambert] likes to do different cover songs, from Jimi Hendrix to Lenny Kravitz to Queen. So it was me going back and studying the eras, and while I was doing that, I ended up falling on top of the blues. But my grandma always loved blues music, so I  grew up around it, listening to it all the time. Little Milton, B.B. King and all of the greats. I’ve been playing in churches and doing gospel music as well, since I was 12, so I was always around that type of music during that period of time in my teenage years. Blues was just another version of that for me. Gospel has the same kinda feel as the blues. On the album we tried as best we could to keep the musicianship of the record and still put heart into it while giving it some feel.

We love that you and Tommy are part of the younger crowd that loves the blues and wants help keep the torch lit. What are some of your musical influences?

Awww man! I have so many, but my all time favorite is Aretha Franklin and we have Roberta Flack and James Brown, Jimi Hendrix and many others including Mother’s Finest, they were a funk band in the 70’s. I think they were bigger in Europe and I think they’re still doing shows but anyways, I love them. They are just ridiculous! Also got to have Earth, Wind and Fire on there.

We’ve noticed a bit of a resurgence into the funk sound, one of our favorites that are doing that is Vintage Trouble.

Oh yeah, I know that band, I’m friends with Ty Taylor. Me and Ty worked together from back in the day. He’s a badass singer.

Oh you know what? Let me go look at my iTunes, because I just bought an album the other day and I hadn’t bought one for a couple of weeks. So the last one I bought was CCR, Creedence Clearwater Revival. I got The Chronicles. Before that, I got this Bette Davis album. She is this old funk singer and if you haven’t heard of her… whew man, yeah go check her out. She is just really phenomenal.

What is your favorite album of all time?

Oh really, you’re gonna do that to me? Okay, man give me a minute. No. Soul Queen by Arethra Franklin or AC-DC’s Back In Black.

What was the first concert you ever went to?

I sang in churches for so long, but my first club show was after I moved to L.A. and was probably me performing. So my first show that I was at live, was me performing in the show. Where I’m from, [North Carolina] there aren’t venues that artists go to that are really close enough. The nearest venues from where I’m from were in Charlotte, which was about a two and a half or three hour drive, and that was pretty much it. And you might not even go to Charlotte if you’re a big artist, you might just go to Atlanta and DC. We really didn’t get in a lot of those acts, so I never had really gone to a show before I came to L.A.

At what point did you decide this is what you want to do for a career?

Well I had been playing since I was a kid, and when I got a little older my parents said, “Okay, if you want to do this you can do it but if you do you can’t quit, so think about it.” So I thought about it and I said “okay, cool”. I started out really young reading music because we had piano lessons every Tuesday at 4:30 after school. So I’d always been reading music and always been involved in music for all those years. I’d always been able to make money playing piano and singing at different churches. So I guess I had been doing it all my life and didn’t really realize what I wanted to do until I saw Smokey Joe Cafe Musical Revue, the performances were amazing! I think I was in high school when I saw that and when I did I was like, okay, that’s what I want to do.

Let’s talk about Rhythm & Booze, who came up with the title?

Actually Rick Jordan, he’s one of our buddies who I played with on a few artists before Adam and he also plays with Adam, he is an amazing drummer… amazing drummer! I love Rick. We were just sitting around having a few drinks, talking about [the album] one day and it was gonna be this or it was gonna be that, and then Rick just comes out, it should be Rhythm & Booze. We were like, “that’s perfect!”

So tell us a little more about the songs.

Well we have the Freddie King song and then the rest of it is heavily influenced by the blues, so it’s a lot of rockin’ blues altogether. Blues, rock and some funk in there as well.

Because of the crossover element that you and Tommy bring to the table, you have the ability to show people what the blues is about.

Right, the blues isn’t what a lot of people think it is. They think it’s only slow and depressing. It’s not. It feels good! It feels really, really good!

Are you guys planning any live shows with this lineup?

Well as soon as we get these videos together, because apparently these labels don’t like to sign artists that don’t have music videos and I thought it was about the music first, so whatever… We just did those first two, so if we can get those out properly and get a good viewership from the videos, then I think the labels will be a little more interested. So yeah we are definitely gonna be trying to play some shows as soon as possible.