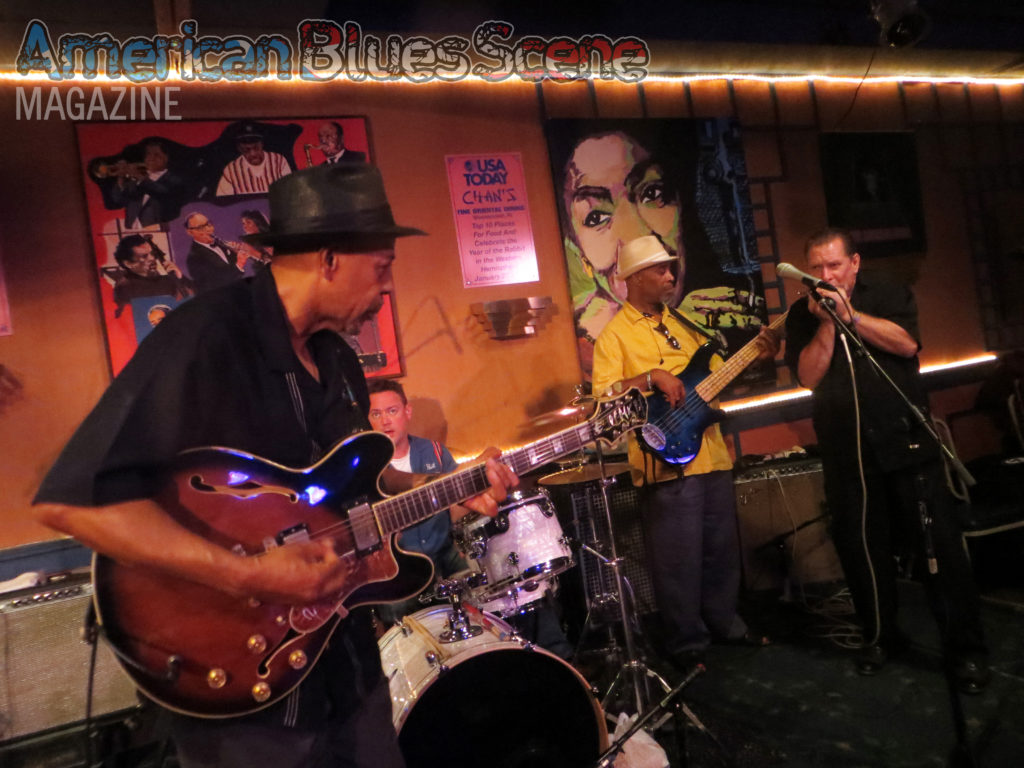 When it comes to Mississippi-born bluesmen who plied their trade in Chicago when blues was still king, there aren’t many left in 2013.

However, John Primer is one of the few still surviving and giving fans their fix of pure, old school blues.

Primer did just that at Chan’s Fine Oriental Dining in Woonsocket, Rhode Island on Saturday night. Playing two sets totaling two-and-a-half hours, the former Muddy Waters guitarist, along with his Real Deal Blues Band, put on a show worth far more than the $15 people paid to get in.

“It was excellent,” said Jack Flanagan of Cranston, Rhode Island, who had a seat adjacent to the stage. “I liked the laid back feel. John is very down to earth.”

What was the highlight song? Flanagan couldn’t pick.

“I liked them all,” he said, while holding Primer’s Blues on Solid Ground CD. “I’m going to listen to them on the way home.”

Whereas some guitarist/singers are all about being the focus of the show, Primer is not so egotistical. With him, the focus is more on the band as a whole, or rather, the groove, and couples were inspired to get up and dance at the front corner of the room very early on. Primer covered everyone from B.B. King (“Bad Luck”) to Jimmy Reed (“Waiting For My Time”) to Earl King (“Come On -Let the Good Times Roll”). Primer also paid tribute to his former bosses Muddy Waters and Magic Slim, the latter of whom Primer spent 13 years with.

Six songs into the first set, Primer shifted from blues shuffles into the funkiest tune of the night, Slim’s “Gotta Love Somebody.” At the end of a heartfelt solo, Primer put his hands up as if to ask, “Where’s my applause?”

The crowd then showed its appreciation.

By the end of the song, harpist Steve Guyger and bassist Melvin Smith had joined in to sing along with their bandleader.

As for the Muddy Waters’ songbook, Primer chose to do “I Feel Like Going Home” and “That Same (Ol’) Thing,” a slow-burning blues that had the crowd eating out of the band’s collective hand. One man shouted a litany of enthusiastic “Whoas” and “Yeahs” during the number, clearly appreciating the music mastery at work.

While many guitarists make their guitars talk, Primer also converses with his six-string instrument. At one point he pulled it closer to him and said “Talk to me baby.” Sometime later, after he made it speak in a burst of notes, he said, “Say What?”

Touring in support of his latest album release, a joint effort with harmonica ace Bob Corritore called Knockin’ Around These Blues, Primer treated the crowd to some of the material. He also went deep in the blues well with Howlin’ Wolf’s “Forty Four” and covers of numerous Little Walter classics, such as “Last Night” and “Confessin’ the Blues.”

Forty minutes into the second set, Guyger, as skilled a singer as he is a harmonica player, was given a chance to take center stage for 10 minutes. He sang Little Walter’s “You’re So Fine” in the style of Walter and then showed his vocal versatility by doing a quality rendition of Junior Wells’ “Come On In This House,” which earned the loudest applause of the night. In addition, a man seated near the stage who had been rocking in his chair all night long, seemed driven to seizure-like movements during “Come On In This House.” Primer noticed and said a few words.

“If we do one more like this you’re going to hurt yourself,” he said, adding, “We’re going to have to tone it down a notch.”

Whereas most musicians that play Chan’s do a shorter second set than the first, Primer and band did not follow suit. Their second set – an hour and 19 minutes long – exceeded the first by ten minutes.