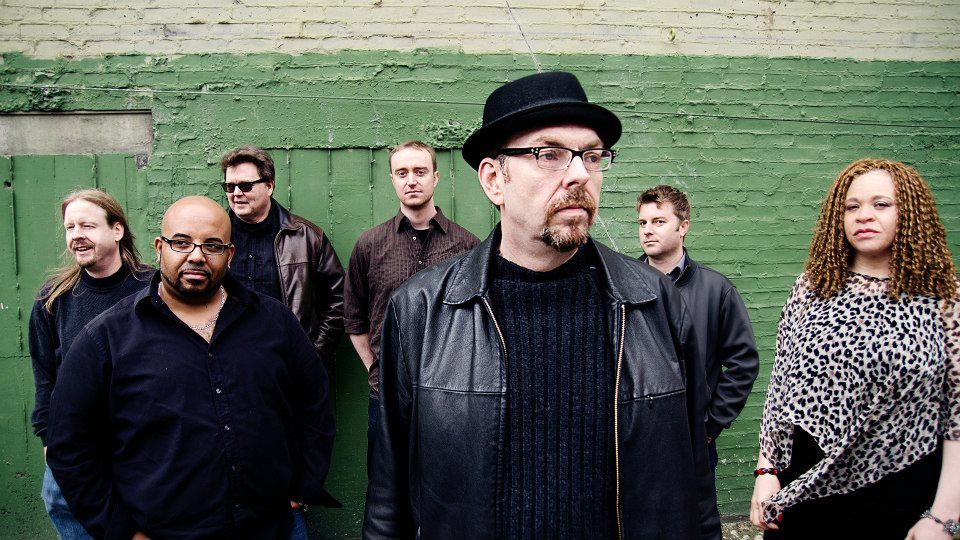 The first time I listened to Muse, the latest release from Portland, Oregon’s R and B and soul artist Ken DeRouchie, I was struck by his deep voice singing lyrics that rang true in every sense. Who hasn’t experienced “drunken epiphanies and moonlight insights” while discussing a relationship with a buddy over a few beers? Whose divorce didn’t feel like “tragedy on display”? And who hasn’t saved voice mails from a lost love because “when I need to hear your voice it’s all that I have”?

The instrumentation is beautifully layered on each track with the great horn punctuation you’d expect from a well-crafted record produced in the R and B tradition. I was eager to find out more about this artist who could write such poignant music, play drums, keyboard, and guitar, and sing with a voice reminiscent at times of Barry White.

The 48-year-old was born in Dearborn, Michigan, the youngest of six children. He was particularly close to his brother Doug, 16 years his senior and already in a rock and roll band. Doug encouraged Ken’s musical interests by sitting him in his lap behind a drum set and thrusting drumsticks into his tiny hands. “By the time I was 2 years old, I was doing it by myself and actually keeping beats and playing along with records,” Ken recalls. “I later toured as a drummer for many years, and it was my brother who got me into music and started me on my way.”

More than once, Doug served as father figure to his younger brother and offered shelter to Ken. That’s how Ken ended up in his current home city of Portland in 1990 when Doug offered Ken a job and place to stay. “He and I were very close. He was always there for me,” says Ken. “He rescued me and pointed me in the right direction.”

While Ken became proficient on a variety of instruments, he was less confident about his ability to sing. It wasn’t until he started his own band in 1996 that he began to sing lead in front of other people. “I was so terrified and nervous to sing in front of anybody in my band in a private rehearsal space. They had to completely goad me into it. I finally started doing it, and their reaction wasn’t horrible.”

The songs on Muse represent two distinct time periods. The first set of songs emanated from a divorce – the “Unglued” period – and was written from 2005 to 2007 in anticipation of a new recording project. The project stalled out due to the end of Ken’s marriage. “There was a lot of transition going on in my life and feeling not creative; feeling not worthy. The band shut down for quite awhile,” says Ken. “I was apathetic about it on top of the apathy of going through another divorce. I wasn’t doing much at all in the way of playing music, and I certainly wasn’t writing music. I felt like I had a failed purpose in music.”

All that changed in 2011. “I met this girl and fell really hard for her. It was one of those really intense and all-consuming kinds of relationships. It only lasted a few months and didn’t end well. It burned itself up real quick,” he describes. “It inspired me, and I immediately started writing. It was only 6 to 8 weeks after we started seeing each other that I ended up in my brother’s studio, and we started recording those tunes.”

Doug had built a home studio where Ken was eager to begin laying down arrangements of the songs inspired by his muse with “Guide You Home” being the first. In addition to providing all of the vocals, Ken also played guitar, bass, and drums on the track. Without his brother’s influence, Ken says Muse would not exist. “I have always credited him with being the inspiration and teaching behind me learning, playing, and loving music. He kept pushing me ‘Let’s record; let’s do this.'”

Unfortunately, Doug’s health began to fail in August of 2011 as they worked on recording the songs for Muse. “As time went on during the process, the more his health declined. I know it got harder and harder for him, but he didn’t want to stop. I know he told his wife her loved the process. After all those years, we finally got to work on a project together.”

Ken brought in his band members as the project grew, including his favorite vocalist LaRhonda Steele, to add their talents to the mix. LaRhonda delivers powerful lead vocals on “Trying to Tell” and “Sexual Chocolate,” the latter being a song Ken wrote specifically for her.

“This Too Shall Pass” was the last song tracked, and soon after, Doug went into the hospital with liver failure. “They were getting him onto the national transplant list, but he never did get well enough to be able to receive a liver transplant,” says Ken. “After about two and a half weeks, on top of the liver failure, his kidneys failed, and he had a couple of heart attacks. His body just completely gave out, and he died.”

The band’s first live performance of “This Too Shall Pass” occurred at Doug’s memorial service. “My band really came together for me and my family, and did some wonderful things at the service for him. I dedicated that song to Angie, Doug’s widow.” The song written to reassure Ken’s muse ended up reassuring Ken that the pain of this loss would subside.

After Doug’s death, the tasks of mixing and mastering the CD fell to Jeff Knudson, Primordial Soup Recording, who is also a guitar player in Ken’s band. “From going from years of tracks sitting in my computer to getting it mixed and out the door to the manufacturer was all of a sudden in a really small time period,” says Jeff. “I mastered 15 songs in 20 hours which is not as much time as I would like to have taken.”

Despite the rush, Ken considers Muse to be the best work he has ever done and credits Jeff with having done an amazing job of mixing and mastering. Like any artist without the backing of a major label, the struggle now is to get the CD airplay and organize a tour in its support.

Ken still thinks about his big brother every day. “I miss him tremendously. I laugh and chuckle quite regularly at the memories that I have. It’s been enough time now that I can look back and have lots of really warm fond memories and reflect on them without breaking down.”