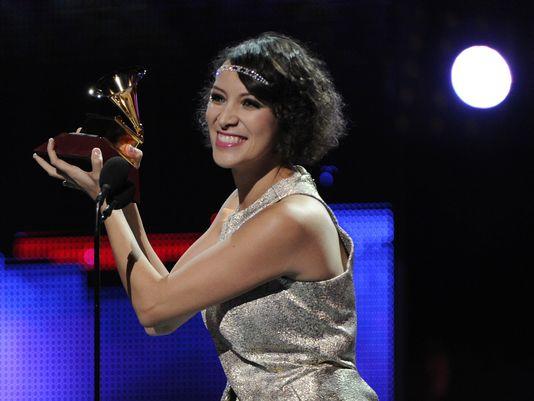 The 14th Annual Latin Grammy Awards were held November 21 at Mandalay Bay Events Center in Las Vegas and Latin Blues singer Gaby Moreno came up big. A rare desert rain storm may have soaked the green carpet celebration but it did not dampen the the spirits of this fiery vocalist.

In 2001, a Guatemalan singer and songwriter named Gaby Moreno left her country for Los Angeles, where she immersed herself into the local music scene and started taking classes at the Musicians Institute. Her soulful vocals and ability to switch languages and genres have made her a rising star. And she sure does love the blues.

The Guatemalan songwriter, heavily influenced by the blues, was named best new artist.  Of course, she is part of Hugh Laurie’s Copper Bottom Band;  See our review of the Chicago show.

“Since I was very little I was always singing,” says Moreno. “When I was 9, I sang in a big theater in Guatemala, and I knew from then that’s what I would be doing for a very long time.”

She says a lot of artists from the past have inspired her, including Edith Piaf and Carlos Gardel, old blues singers like Robert Johnson, Bessy Smith, and even soul music like Ray Charles, Aretha Franklin and Nina Simone — and you can hear remnants of them in her music.

Moreno’s musical life and her journey into the blues began when she was 13, on a family vacation in New York. She says she and her family were walking through Times Square one night when something caught her eye.

“I saw this lady who was singing on the streets. I just froze, I can’t even begin to describe to you what I felt when I heard her music. I asked her, ‘What is that style you’re singing in?’ And she just looked at me like, ‘You don’t know what the blues is?’ “

Moreno asked her mother to take her to a record store right away and buy her some blues records. Growing up in Guatemala, Moreno had been surrounded by Latin rock music, but she says it was never really an influence on her. Once she found the blues, however, it was all she could listen to.

“Those singers — they became my teachers,” she says. “I would just lock myself in my room and sing Koko Taylor and Aretha Franklin.”