Today in History – The First Jukebox Made It's Musical Debut 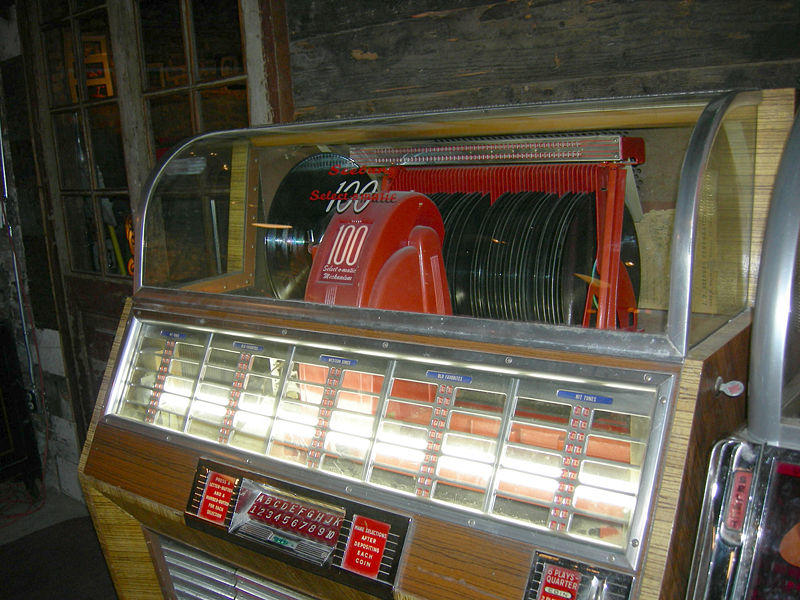 The Jukebox — that all-important machine that sat in the corner of just about every drinking and/or hangout establishment in America through a large part of the 20th century. It was arguably one of the key factors in shaping music and culture in modern times. Almost everyone has heard the stories of friends or strangers hearing a song on the jukebox and then asking others what or who the song is and then that person rushing out to get the music for themselves. The famous image of “The Fonz” is forever etched in our minds as the master of that amazing music machine that gloriously spit out just the right song, at just the right time — and occasionally the wrong song at the wrong time.

The classic jukebox is an automated music-playing machine. It’s usually coin-operated and it will play the customers’ music selection from the available cache of songs contained in the belly of the beast. The customer presses any combination of buttons, “A-7” for instance will get you “Mustang Sally” on a regular basis. But where, when and how did this bearer of happiness (or sadness) come into play? The term “jukebox” came into use in the United States around 1940, derived from the familiar usage “juke joint“, derived from the Gullah word “juke” or “joog” meaning disorderly, rowdy, or wicked.

We know that one of the first music-for-money playing devices was invented by Louis Glass in San Francisco. Glass was an innovator, and somewhere around 1879, he’d gotten burned out working with old technologies, so he left his cushy job manning the telegraph lines for Western Union. He knew that he wanted in on this new craze sweeping the nation and that was the telephone, so he invested in some of the phone companies in both the Bay area and Southern California and rose to become the general manager of the Pacific States Telephone and Telegraph Company.

Glass wasn’t satisfied with just the telephone, however. Thomas Edison had invented the phonograph in the late 1870’s, and a decade later Glass took over the reigns of Pacific Phonograph Co. as well as some other phonograph companies in the coastal states of Washington, Oregon and of course the aforementioned California. But it was in the city by the bay that he had the big idea — the one that would be forever in our hearts and become a massive icon, still revered by avid “Jukebox” collectors today.

The 44 year-old Glass, with his partner William S. Arnold, presented a device that would play a song from a wax cylinder phonograph but here’s the catch; only if you put a nickel in the machine. That first machine was called the “The nickel-in-the-slot phonograph”!

The first machine was installed at Palais Royal Saloon in San Francisco on November 23, 1889 — exactly 124 years ago today. Glass’s office was a mere two blocks away and he asked the bar manager if he could display the new-fangled machine to the public there. Not much is known about that first machine, as this establishment went under somewhere around 1890 and the San Francisco earthquake of 1906 destroyed everything around there, but during the first year of the jukebox, from autumn 1889 until summer 1890, quite a few coin-operated music machines were produced in that area. During a conference in Chicago in 1890, Louis T. Glass brashly told other operators and manufacturers that the first 15 machines had brought in a little more than $4,000 from December, 1889, until May, 1890. That was quite a tidy sum in those days, so it’s easy to see why competitors scrambled to get in on the action.

Throughout the next several decades, the look and operational mechanisms of the nickel-in-the-slot phonograph changed to meet the demand. Manufacturers sprung up all over the world, as the idea had caught fire elsewhere. In fact, a similar idea to Glass’s was born over in London at nearly the same time, maybe even a bit earlier, but it is still Glass who is credited with the title of “inventor of the jukebox”.