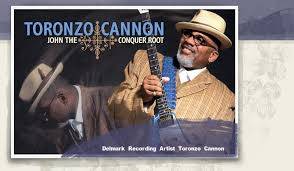 A pinch of Texas blend: a little SRV, some Albert King, a biting wisp of Johnny Winter. A pinch of Sam Cook soul, a big handful of Chicago, a dose of Jimi Hendrix tribute, stir that all around and what comes out?

Toronzo Cannon and his new album, John the Conquer Root, on Delmark Records. Toronzo can play the guitar, but better yet, he writes damn good songs. Specifically, all of them on this album.

Toronzo reminds us in this album, as he says in “Gentle Reminder”, “I shouldn’t have to say this, but I’m a blues man through and through.” Everything in this album reflects his ability to adapt styles to himself and own them, to reflect his influences. After all, this isn’t 1952.

This album is vaguely structured like Hendrix’s Electric Ladyland album, with a voodoo song that has a redux. The difference is that Toronzo starts and ends his album with the voodoo songs. In between, he packs a whole lot of Chicago style blues, circa 2013.

And what a showcase of all that Chicago blues is, a fully amped up version of raw Delta. The rocking boogie of “Sweet, Sweet, Sweet”. The early bop story of “Big Ray Bop” (Chicago fans might hear a little Seigel/Schwall Band), and the horns that appear in the Sam Cook rhythm and blues styled “Cold World”. There’s a funk groove If “You’re Woman Enough to Leave Me”, and through it all you can hear how Toronzo has matured as a guitar player and band leader. Yes, the guitar is the lead instrument, and on this album, an excellent lead. Mr. Cannon has learned it’s not the only instrument, and gives us delicious ear nourishment in this collection of songs. There’s also the slow blues in “You Made Me This Way”, and if any song evokes “the popular image of a tiny bandstand in a smoky club crowded with musicians jamming away on electric guitars, harp, piano, bass and drums,” this song does.

This dynamic album has a gem that seems a second tribute. Anyone recall the one, lone, intimate, acoustic number on Stevie Ray Vaughan’s “The Sky is Crying?” Toronzo treats us to a new side of himself, because a man, his voice, and just an acoustic guitar, is a sharing of the vulnerable. Although seemingly the antithesis of Chicago blues, one wonders if such songs are the foundation of them. Thank you, Mr. Cannon, for this precious gem.

The other tribute of course is the Hendrix style voodoo redux, and unlike a lot of the very unoriginal tributes that dot the musical landscape, this one is well done. The guitar playing shows us how much an influence Hendrix has been, yet loses none of the originality that Toronzo owns. And he owns it.

If you want contemporary and unique Chicago blues, then this album is for you. Toronzo Cannon’s John the Conquer Root on Delmark Records.