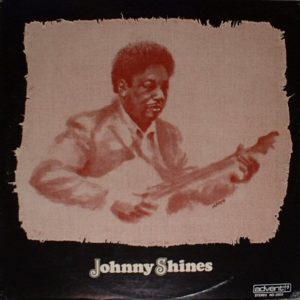 Johnny Shines is beloved in the blues community. While he is most often remembered for the music he left behind, there is so much more to the life of this blues pioneer. Though his life was often hard, he faced struggles head on, determined to overcome obstacles in his path, and provide the best life he could for his family. Born in Frazier, Tennessee on the 26th of April, 1915, Shines originally learned guitar from his mother, who taught him early on. He put musical ambitions on hold working on farms for several years before meeting the legendary Robert Johnson in 1935. One of only a handful of people known to have traveled with Johnson, Shines traveled with him until they parted ways in 1937. Johnson was to be the major influence on Shines’ music throughout the rest of his life.

In 1941 Shines moved to Chicago, working construction by day, and playing in local venues when he could. He recorded for Columbia records and Chess Records, with neither of these sessions being released. After recording for the J.O.B. Records label, and that not becoming commercially viable, Shines turned his back on the music industry, and again worked construction.  In 1966, Shines recorded for the third installment of Chicago/The Blues/Today, and this now legendary album propelled Shines into the spotlight. He toured with the Chicago All Stars with greats such as Willie Dixon, Lee Jackson, and Big Walter Horton.

Shines eventually moved to Holt, Indiana. Over the course of the ensuing years, he occasionally played at the local coffee house, even inviting his friend Mississippi Fred McDowell to appear with him. He also toured on the international blues circuit. Later, he would tour with Robert Lockwood Jr. as the last of the original delta blues musicians.

There were times however when things became difficult, and Shines did whatever he needed to do to ensure that his family was taken care of. One of the main reasons that Shines had come to the Tuscaloosa area was because his daughter from a previous marriage had died, leaving Shines and his wife Hattie to care for her young children, adding ten members to the family. His daughter Carroline Shines remembers “My father had a house full of kids to feed. I had an older sister, and she died and left 10 kids. Well, my dad took all those kids in. He had me, plus the ten to feed, and basically, he was out on the road all year, trying to send money back home to feed all of us.” Consequently, Carroline did not see a lot of her father when she was a youngster. “No I didn’t; not a whole lot while I was growing up. Dad was on tour so much, he probably came home for Thanksgiving and Christmas. The rest of the time he spent out on the road. When he did get a break, he was doing the gardening, fishing, or he was hunting. You know, different things trying to make ends meet. He worked construction, and he was a photographer. He did it all, just trying to put food on the table.”

This is the life that his daughter, Carroline Shines, remembers with admiration and affection. This is the legacy she seeks to honor and preserve with the Johnny Shines Blues Festival. 2014 will mark the fourth year of the festival, which will be held on August 30th, at 4017 Johnny Shines Street N.E., Tuscaloosa, AL. The first festival was held in 2010, with Bobby Rush as one of the performers. Since then, attendance has increased with each subsequent festival. The third festival, held in 2012, focused on women blues performers and featured Alabama Annie, Porsha Ray, Hattie B., and Panga Lester. Shines herself performed, as did Alabama Blues Project co-founder Debbie Bond.

For those who don’t recognize the festival address, it is the former home of Johnny Shines, where Carroline Shines lives, and is now raising her family. The festival serves as a big community get-together where friends and neighbors share the experience with each other. Shines’ yard, as well as adjacent yards, face a school yard, so at present, there is ample room for everyone to share the food, music, arts and crafts, and comradely the festival brings to the neighborhood each year. “It’s just amazing. It’s a lot of hard work, and a lot of volunteers from different places. Sometimes, students from the University of Alabama will come out and help. A lot of church people come out and help. My neighbors too. My neighbors donate water and food, and different stuff like that. Local venders are at the festival as well. Neighbors and friends. We have people that do arts and crafts, and just all kinds of things.”

Like a growing number of today’s female blues performers, Carroline Shines does her best to juggle a family life, two jobs, charity work and fundraising, as well as performing. “Yeah. I work at night, and teach in the daytime. I try to gig when I can on the weekends.” There was no festival in 2013. “We took the year off because I got married in October of last year. I had to put the wedding together, and plan for the festival also. It’s really hard.”

The most difficult aspect of putting on the Johnny Shines Blues Festival has been securing sponsorships and raising funds. “I ask for sponsors, and work within the budget that I have. Usually, I try to raise at least $3000 dollars. If I raise a little more, that’s fine, but usually we try to raise $3000. I find great artists, and I also use the Blues Camp Kids, who are affiliated with the Alabama Blues Project, along with local talent so that they get some exposure also. We have a gospel session, and we have a rap session, and blues. Like I say, we use the kids also because kids need to know about the blues.”

Shines also works with local businesses and organizations to promote and stage the festival. “The City of Tuscaloosa, they help, and the county, they help too. Jim Walters Resources is a natural resource, a coal mining operation, and they’re my biggest sponsors that I have. Hudson-Poole Fine Jewelers is one of my big sponsors. They help me come up with the money. The Coal Mining Association helps me come up with posters and tickets, and things like that. Rollins’ Mortuary, and Tuscaloosa Memorial Park and Chapel assist us as well. Wilhagan’s of Tuscaloosa always provides us with porta-potties.”

In an effort to raise more funds, Shines has been looking to other sources as well. “I’ve been trying to work with the Alabama State Arts Council, trying to get a grant. I’m learning how to do all this stuff, trying to pull everything together.” She is also in the process of setting up various pages on Facebook to spread the word about the festival to a wider audience.

As to this year’s festival line-up, Shines is working to bring in several artists. “There’s a local band that I really like, called Southland. I’ve been talking to BJ Miller. She’s from St. Louis, but she’s moved here. What it is; I ask for sponsors, and I try to come up with a budget. So, I have to get people within the budget that I have. I’ve  reached out to Omar Cunningham, and he said he’ll call me back. I reached out to Southland. I did reach out to Kent Burnside again. He said he’s willing to come again, so we are trying to work that out.”

Festival goers can be assured that the event will feature exceptional regional, and local talent, bringing the community together through the blues, to celebrate the legacy of Johnny Shines. “It’s personal to me,” Shines says. “The backyard just feels right. I like sharing my home. I want a cozy feeling.”