An Evening for Walter Trout at Shepherd’s Bush Empire, London 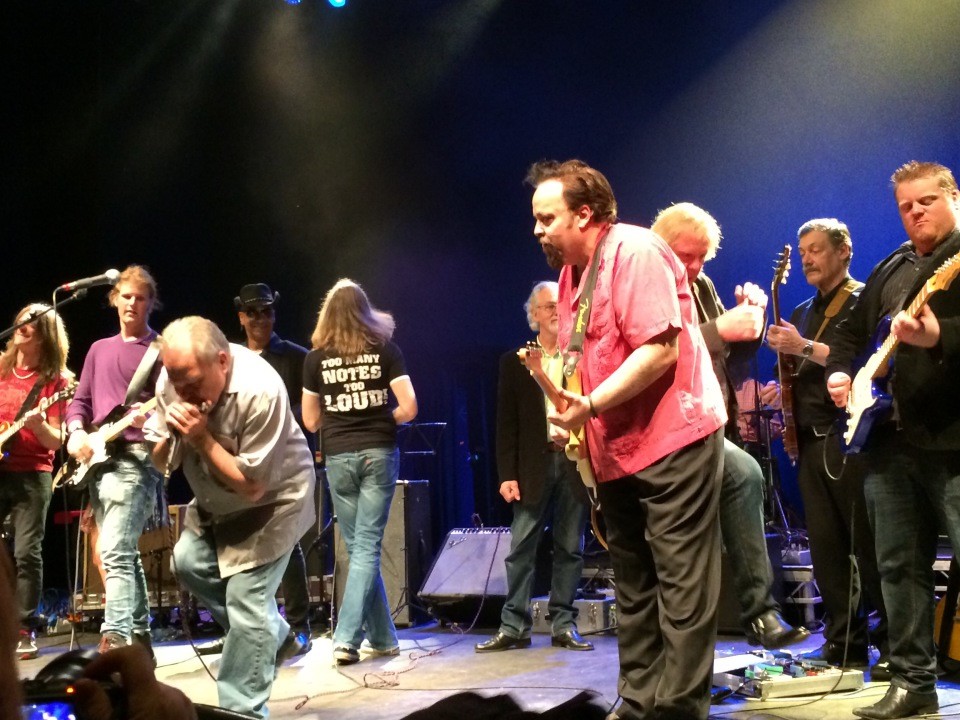 This very poignant, very special event that I would like to christen as ‘Live Aid for the Blues’ is no hyperbole; it’s mere fact. Because tonight the legendary Shepherd’s Bush Empire in West London played host to a great many of the finest blues artists in the world.

The reason for the gathering of this electrifying clan and equally fervent fans; a benefit gig for living blues legend, Walter Trout, currently gravely ill with liver failure. I feel sure Walter will have heard and felt the love for him as the whole place was carried on a wave of homage and devotion to the Godfather of modern blues.

Phrases like ‘never to be repeated, a total one off, unique, unparalleled, and memorable’ are thrown around with abandon and truly rarely apply. But tonight, all of these phrases and adjectives apply in full. This was one completely and utterly memorable night and one that I will carry in my mind, memory, heart and soul for the rest of my life. There is not a musical movement that can deliver the quality, power, passion and emotion like the blues community, and tonight it was out in force and created an unstoppable torrent of unforgettable music and moments.

I sit here with a head full of words but I struggle to put them in to some form of coherent order, such was the experience. It really has touched my soul in a way that no other music event or gig has, and I was at Live Aid, an event that I thought would never be topped in my lifetime — but it just has been. This is the greatest privilege of my musical life. The adrenaline courses through my blues blood veins and my fingers move over the keyboard with the energy crated by the event, and maybe the words just write themselves. That adrenaline rush is, however, tempered very slightly because in an ideal, fair and just world there would not have been the reason to put the gig on.

For nearly four hours, Shepherd’s Bush Empire was filled to the rafters with the sound of the blues, keys, brass, rhythm section, harp, harmonica, booming vocals and oh yes, there were a few guitars and their respective Six String Svengalis on display!

Telecasters to the left of me, Stratocasters to the right of me, Gibson Les Paul’s stuck in the middle. It was guitar heaven and then some. With the collection of artists on show, every facet of the blues was in evidence; traditional hurting plaintive blues, soul drenched blues and full on blues rock.

It would be churlish and disrespectful to these fabulous people to single out individuals. This was not about these fellas strutting their stuff for personal gain, it was a collection of musos all feeding of the atmosphere and vibe and giving 110%. From the opening act through to the blues jam that brought the curtains down, every single one poured their heart and soul in to the performances and left their own imprint on proceedings.

Big respect and tip of the hat to the awesome Flamingo Club All Stars who took on the impossible role of ‘house band’ for the whole show. They pulled it off with ease and élan, providing the rhythm section and so much more to everyone. Such was their prowess that the transition from artist to artist was seamless. In Alan Glen the band has a real guitar virtuoso and John O’ Leary, a man that made the harmonica cry out time after time.

Don’t run away with the idea that this purely a guitar feast, because there were some mighty mighty vocal pipes on show from the beautifully soulful Paul Cox, the rasping howl of Andrew Elt and the blues-drenched tones of Marcus Malone and Family’s Roger Chapman.

I know you want to know more about these guitar maestros, so I will pick out just a few segues from the show to illustrate the aural soundscapes that filled every nook and cranny of the arena. The middle set was incredibly emotive as three brilliant British blues hotshots took their turn to shine, and the three are all protégés of the great man and each spoke of their love and admiration for him.

First up, the prodigious talent that is Laurence Jones who peeled off riff after hammer riff and threw down searing solos in equal fashion. Laurence’s set included the majestic “Fall From the Sky”, a track from LJ’s latest album that, even in such poor health, Walter met a commitment to play on the track. One look at Laurence’s face showed how much this one song now means.

Next up, the fabulous Mitch Laddie who chose his own tribute to Walter by playing three of the man’s own numbers, accompanied by the potent booming vocals of Andrew Elk, long-time friend of the great man.

And then to take us in to a short break, the sublime emotion-drenched blues playing of the one and only Danny Bryant. Bryant can sing, but when you can play a guitar like this guy, words are almost unrequired. Bryant bled out torrents of pitch perfect notes in his three-song set and demonstrated incredible subtlety and dexterity.

After such a glorious, ferocious opening to the show, it is no surprise a short break was needed. But when the music started up again, Del Bromham blew away the cobwebs with a short, sharp firecracker set of his own brand of rock-fueled blues.

And to follow, beguiling appearances and sets from two absolute living legends, the mercurial Bernie Marsden who bought the house down and tears to eyes with a fragile, laid-bare version of his classic, “A Place in My Heart”. Marsden played as he always does, with unbelievable touch and feel; the notes fell from his signature PRS like tears from a child.

The one and only Otis Grand was hot on Marsden’s heels and he ripped the place apart with a scorching set, tumbling out the most incredible note sequences and scorching finger shredding solos. This man is a showman as well as a stellar player.

Perhaps the most touching and emotional part of the night unfolded when Walter’s young son Jon strode on stage and, just like his dad, threw a Strat over his shoulder and proceeded to blister the walls with smoldering blues for which his dad is famed throughout the world. This must have been so difficult for the young man, but his poignant well-chosen words of respect and appreciation spoke volumes for him as both musician and human being. The trademark Trout sound and pedigree is in very safe hands.

I kind of guessed the show’s finale would be something special but nothing could have prepared any of us for what unfolded before our eyes and ears. Virtually every musician on the bill returned to the stage and delivered a monstrous, stretched and monolithic version of the main man’s classic, “Going Down.” Everywhere you looked there were singers booming out the vocal and absolutely everywhere, there was a guitar and its pilot in full flight. The stuff of which dreams are made.

And that, my friends, was An Evening For Walter Trout, where everyone gave their time and talent for free for a man synonymous with the blues.

When people ask me why I love the blues, I say blues is the music of the people. Honest people. People with heart and soul. The blues is about family and I am proud to be part of this family. Never have these values been more in evidence than tonight!

My heartfelt thanks to each and every organiser, technician, sound person, audience member and artist for making the dream become reality. Keep real music live!

You can help Walter Trout