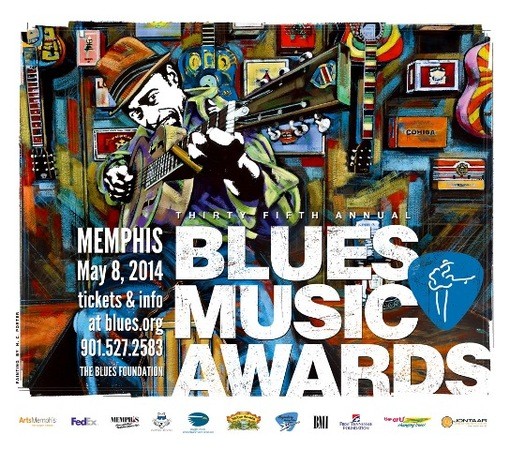 The Blues Foundation sent out a message at the 35th annual Blues Music Awards in Memphis on Thursday, May 8th: The state of blues is strong. President and CEO Jay Sieleman announced at the awards ceremony that the Raise The Roof capital campaign to generate $2.6 million for The Blues Hall of Fame is a success and that construction of the building across the street from the Civil Right Museum will begin June 1st. The new facility will “pay tribute to the great blues men and women, giving them and their music the respect and validation they deserve.” His announcement was the opening salvo of six-hour extravaganza featuring a cross section of the genre that included some of blues’ best performers who looked both back to its long heritage and forward to a creative future.

Both the awards themselves and the more than seven hours of performances provided many pleasant surprises to an event that’s steadfastly never degenerated into a “good old boy’s club”. Buddy Guy did not sweep all the awards. Previously under-represented artists like Lurrie Bell, Doug MacLeod and Diunna Greenleaf took home statues, and young up and comers like Magic Slim’s son, Shawn Holt, who has taken over his father’s “The Teardrops” band thrilled a packed house and demonstrated deep feelings. Contemporary favorite Beth Hart also overjoyed blues fans from across the country with her powerful brand of soul blues.

The hit of the night was Beth Hart’s performance. This 40-something stunningly attractive woman channeled Nina Simone with all the traumatized quiver in her voice and intense emotion that let you know she’d been through some trials. Once signed to Atlantic Records in the ’90s, she had suffered from substance abuse problems, but has since come back stronger than ever. As she sat down at the piano, she moaned, “This pedal is jacked up. The story of my life.” But she rallied, the pedal was fixed, and she held the audience in her emotional grip from two songs that hinted at a life that’s been anything but easy.

My personal find of the night was Frank Bey & Anthony Paule Band. In the tradition of the Holmes Brothers, this soul blues band brings a gospel feel to original secular songs with a smoothness and depth of feeling not often heard in today’s blues.

Chicago blues veteran James Cotton’s performed with Elvin Bishop sitting in and singing “He Was There” with the song’s co-writer and producer Tom Hambridge on drums. The song, nominated for Song of the Year, is an autobiographical reminiscence of Cotton’s early years in the Windy City’s South Side clubs. Alligator CEO Bruce Iglauer tells me Hambridge would sit with Cotton and turn his thoughts into the lyrics. But to have Elvin list all the people who were there and sing out bug-eyed,  “Is there anyone I’ve forgotten? Oh, yeah, James Cotton” was a highlight of the night.

There were some surprises. Buddy Guy was only up for two awards: B.B. King Entertainer of The Year, which he won, and album of the year for Rhythm & Blues, which he lost to Remembering Little Walter on Blind Pig featuring harp men Charlie Musselwhite, Mark Hummel and Billy Boy Arnold, all of whom performed, and Sugar Ray Norcia and James Harmon, who did not. As expected, Tedeschi Trucks Band took both categories for which they were nominated: Rock Blues Album for Made Up Mind and Band of the Year. Derek Trucks had quipped a couple years ago from the same podium that if Buddy Guy had been up for the particular award Tedeschi Trucks had been up for, he (Trucks) wouldn’t be standing there.

Best New Artist Debut went to Shawn Holt & The Teardrops for Daddy Told Me. Shawn Holt is Magic Slim’s son who has taken over his dad’s hard boogie band and picked up right where his father left off. While Slim was a larger than life character with roots as deep as James Cotton’s, Shawn was more than able to project an aura that amply showcased this veteran band.

One might expect New Orleans’ Irma Thomas to take Soul Blues Female Artist and Cedric Burnside drummer of the year, but Diunna Greenleaf’s Koko Taylor Award win had her shaking in disbelief and at first speechless at the podium. Finally, she said “This is just sinking in,” took a breath and commented, “Koko said my day was going to come.” The Houston, Texas-based blues shouter has been struggling to be heard for more than a decade.

Doug MacLeod, one of the best storytellers in the genre, took Acoustic Artist and Acoustic Album for There’s A Time. His live rendition of “The Entitled Few” about someone who spent $6000 for a handicap parking permit while a mother with a crippled child looks for a spot in the parking lot captured a classic blues feel with a contemporary issue.

Bobby Rush was uncharacteristically close to tears as he accepted the Soul Album of the Year Award for Down in Louisiana. “I don’t have much to say tonight,” he said. “I didn’t think I was going to win.” Then, he briefly referred to his mantra about crossing over and not crossing out, but added, “Thanks for letting me be myself.” Down in Louisiana showcases his acoustic guitar talents and de-emphasizes his flamboyant persona with his big band.

Ronnie Earl accepted his Guitarist of the Year Award by saying he was here only by the grace of God admitting that he has bi-polar disorder and saying he was thankful that this affliction was no longer stigmatized. Always a technical marvel, Earl found new heart in his playing and called up Bob Margolin from the audience to share the stage, crediting the fellow veteran axe man for introducing him to Muddy Waters.

Rory Block gave an intensely powerful acoustic slide guitar performance. I’ve been listening to her for more than 40 years, and she just keeps getting better and better at channeling the progenitors like Rev. Gary Davis.

An afternoon presentation by members of the Recording Academy of Chicago and Memphis made an effort to tell an audience of blues movers and shakers that the concern many in the genre have about the Grammys short changing the blues by cutting back from three genre awards to one does not mean that they are trying to push blues out of the picture. Speakers emphasized that it’s the creative members of the Academy that vote for Blues Album of the Year. That tone was also evident in the BMA Awards. The feeling of the day was that we’re not just looking in the rear view mirror, that blues is the American art form that reflects our primal screams and our dreams.