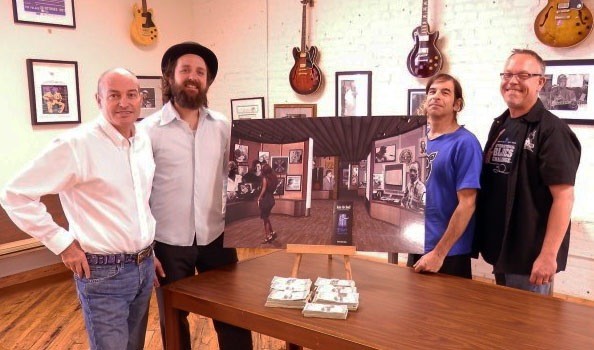 Blues musicians and fans continue to help “Raise the Roof” to make The Blues Foundation’s plans to make a Blues Hall of Fame a physical reality on South Main Street in Memphis. More than 1000 donors have donated $2.76 million dollars, to date, and additional donations will ensure that the content of the exhibits will be of the highest quality. Construction at the site has begun and continues as do fundraising efforts. Photo below underscore the grassroots support the Blues Hall of Fame project has received from the blues community.

Beyond the individuals inducted, the Blues Hall of Fame has honored 83 iconic blues singles (or album tracks) and 76 blues albums into the Hall of Fame. Additionally, 40 “Classics of Blues Literature,” published books, that deal with various topics and aspects relating to America’s most singular art form, have been enshrined.

The math is compelling: 393 people and works have been inducted but, until now, those inductees resided in the virtual world. At long last, geography and architecture are coming into play with a physical, brick and mortar Blues Hall of Fame about to become a reality.

The Blues Hall of Fame will pay tribute to the great blues men and women, giving them and their music the respect and validation they deserve, educate tens of thousands of visitors about blues music and its performers, whether those visitors are young school children or music fans from around the globe, and bring tens of thousands of visitors into contact with The Blues Foundation and its programs.

The entity will occupy a 12,000 square foot site located at 421 South Main Street in Memphis, directly across from the National Civil Rights Museum. That location has, most recently, served as the headquarters of the Blues Foundation. It will be gutted to accommodate both the Blues Hall of Fame and Blues Foundation offices with the Foundation lodged in temporary quarters over the course of the anticipated 10-month construction process.

After construction is finished, for the first time, the Foundation’s collection of artifacts and ephemera that relate to those who have been inducted, their music and chronicles of the milestones they achieved will be displayed and/or accessible to the general public. Some of the materials include virtually priceless recordings, instruments, articles of clothing and writings associated with the legends who have been honored with induction.

Design, repurposing and renovations to the building and construction of exhibit areas are set at almost $2.5 million. To date, the Blues Foundation’s ‘Raise the Roof!’ capital campaign has raised $2.76 million. The capital campaign is not completed as additional funds will help maximize the qualitative content of the exhibits such as film, artifacts and original art.

Approximately $850,000 has been donated by Memphis philanthropists and the remainder has come from blues fans around the world.