The Language of the Blues: JAKE 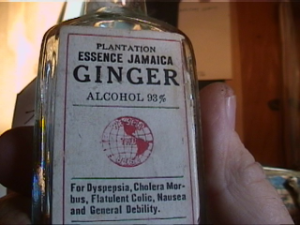 Grab a signed copy of Devi’s award-winning blues glossary The Language of the Blues: From Alcorub to ZuZu (Foreword by Dr. John) at Bluescentric.com. Also available on Amazon Kindle.

Jamaica Ginger, or JAKE, was a patent medicine with a very high alcohol content that was much sought after during Prohibition. When the Treasury Department became aware of this, the Department ordered anyone making Jamaica Ginger to change the formula.

What unscrupulous vendors did, instead, was doctor their Jake with an industrial plasticizer (a chemical that makes plastics soft and bendable) so that if government agents tested a bottle, they wouldn’t be able to detect alcohol. This bright idea caused tens of thousands of customers to become paralyzed in their hands and feet. For many the damage was permanent.

I drink so much of Jake, ‘til it done give me the limber leg
If I don’t quit drinking it every morning, sure gonna kill me dead

Pick up a copy of  Language of the Blues.