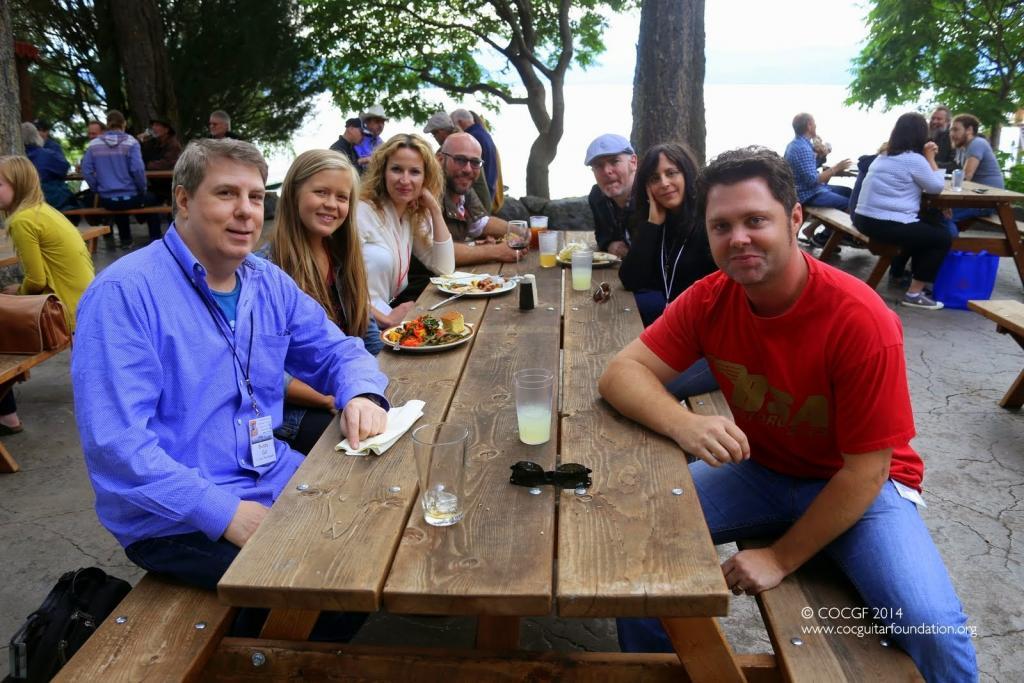 (BIGFORK, MT) — Ana Popovic proved the blues knows no bounds as the first female Artist-In-Residence at the internationally acclaimed Crown of the Continent Guitar Festival & Workshop Aug 24-31 in Bigfork, Montana. Not only did Popovic play a searing concert that brought a crowd of hardcore guitar aficionados repeatedly to its feet, she also jammed with Dweezil Zappa, legendary session and jazz guitarist Lee Ritenour, Americana singer Shelby Lynne and John Oates of Hall & Oates.

Popovic just about burned the festival’s big white concert tent down with one raging solo after another on tunes like “Can You Stand the Heat” and a revved-up cover of Albert King’s “Can’t You See What You’re Doing to Me?” She also popped up throughout the week to jam with her intimidating fellow Artists-In-Residence.

In addition, Popovic gave an afternoon clinic for the Crown Guitar Workshop students, who study guitar for three hours every morning, and dropped in on Jeff McErlain’s Advanced Rock and Blues class to share her favorite licks and answer questions. Lucky students!

In her clinic, Popovic proved both fearless and passionate, noting, I’m a very demanding bandleader. As a guitarist, you need to demand the best rhythm section for yourself. I want to feel that excitement even six months later from my drummer and bassist. If they are starting to lose their passion for the music, I change them up. Change is good!”

Initially, she said, she wasn’t as confident, but “the years have made me tougher. I’ve learned to put my demands out there. I had to stand up a producer early on in my career. He wanted me to do all this country blues and I wasn’t feeling it. I was twenty three and from Serbia and I had to stand up to him—so you can, too!”

Asked by a student how she keeps growing as a guitarist, Popovic explained, “When I’m home in Memphis I get lessons from great teachers whenever I can.” The mother of two young children added, “I think being a musician is no more important than any other job. I always wanted to make my relationship and my family work, too.”

She also expressed her gratitude for having been invited to play on the Experience Hendrix Tour: “As a female, it’s a big privilege.” She noted that, to her surprise, there was no attitude on that tour, despite the potentially huge egos aboard the tribute train.

“I expected some kind of attitude or laziness,” Popovic mused, “but there was none. Buddy Guy was on fire from the first note, and so was everyone. I discovered that when you cross into this level, you can have over twenty incredible guitarists and everyone is just cool and thankful to be there. There were no ego trips.”

Popovic also shared that she recorded the solos on her most recent album, Can You Stand the Heat? live! “I did ‘Ana’s Shuffle’ when I was seven months pregnant. The guitar barely fit around my body—I had to sit down! I was playing like B.B. King with the guitar on my belly.”

Her advice for guitarists hoping to solo as well as she does? “I think about the groove. Nothing else. All I think about is being inside the groove. You can shred or play wrong notes but if you’re in the groove, it doesn’t matter. The groove is all that matters.”