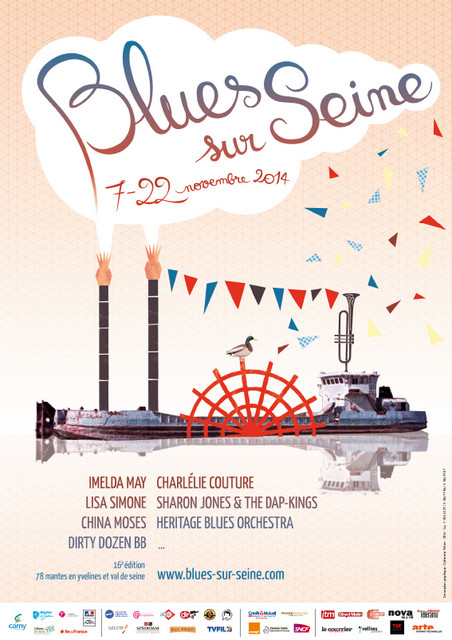 (FRANCE) — More than 74 blues artists and groups will be presented at the 16th annual Blues-Sur-Seine Festival located in thirty towns alongside the river Seine, running west from Paris, between November 7 and 22.

Headlined by Sharon Jones, China Moses, The Dirty Dozen Brass Band, Boo-Boo Davis, and Lisa Simone, Imelda May, Charlélie Couture, Toni Green, the Heritage Blues Orchestra, and a host of top pro — but unknown in the States — acts from as far afield as Senegal, Italy, Switzerland, Canada, and Sweden, the Festival will include 159 events, 117 concerts; and 99 cultural, educational and social performances and presentations.

For an idea about how wonderfully intercultural and weirdly representative of American blues is their program, take a look at their video and their site’s English page.

Why are the French so crazy about the blues? Since the 1920s, the French have been enthusiastic supporters of Ragtime, New Orleans and blue jazz in all its colors. There are 86 blues music festivals, 34 radio stations, and hundreds of clubs featuring the blues in France this year, according to L’Agenda de Blues in Lyon. By comparison, only 500 blues fests are listed for the whole planet by most music magazines. In fact, there have been blues organizations in every European nation since the 1960s; they even have an EC Blues Union, promoting international partnerships.

Like most blues festivals in France, Blues-Sur-Seine also holds a talent contest, this year the Tremplin National de Découvertes Blues auditioned 66 indigenous artists and groups for a six-band final showdown as one of the kick-off events. The winner gets a year of professional production, financing, marketing, recording and public concert dates. Runners-up get a slot at the Montreal Blues International fest, or concerts with the area’s Club Mississippi. All are recorded on the Blues-Sur-Seines annual CD.

The non-profit associations of Blues Sur Seine are not just concert promoters. The organization is largely made up of benevolent groups and volunteers aimed at “the development of social cohesion through cultural, educational and community events in the context of live concerts, fine arts, literature and multimedia.”

For instance, last year some 500 primary school children were given lessons in harmonica and blues singing, and performed in small groups for 15 terminally adorable minutes as warm-up acts before each major concert. Sessions were held in retirement homes, prisons, youth foyers, emergency centers, reform schools, libraries, museums, soup kitchens and benevolent organizations like the Emmaus association for the homeless. They also organized 65 social and educational events during the Festival’s 16 days including dances, musical plays, film premieres, art shows, musical master classes, and an international talent show. This year they are producing a play about Billie Holiday (“Snow Black”), releasing a CD of blues created by inmates of the county prison, and conferences on the blues and slavery, segregation, white/black partnerships, blues producers and the publication of art comic books on the lives of Robert Johnson, Alan Lomax. Among a dozen programs for 8 to11 year-olds, school presentations will include history lessons on the roots, decline, and renaissance of the blues.
If you are anywhere near Paris next month, check it out.