This Week in Blues Past: Magic Slim, Skydog, Leadbelly, MORE!

Editor’s note: After a one-week hiatus, please welcome back “This Week in Blues Past”! You asked for a weekly summary of our daily blues history on Facebook and we listened! Come visit each Monday, where we will be listing the top ten events in blues history in chronological order. 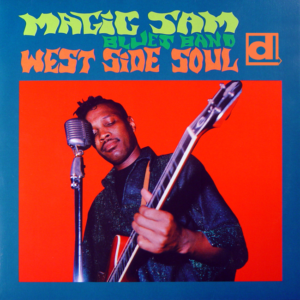 December 1st, 1969: Chicago blues guitarist, Samuel “Magic Sam” Maghett died of a heart attack in Chicago, Illinois at the age of 32. He was born in Grenada, Mississippi on Valentine’s Day, 1937 and learned guitar by listening to Muddy Waters and Little Walter. At the age of 19 he moved to Chicago and recorded his first album with Cobra Records a year later. He was later drafted into the US Army, but ended up deserting which garnered him a dishonorable discharge and 6 months in prison. In 1967 Sam was signed by Delmark Records, with whom he recorded what is arguably the greatest electric blues album ever, West Side Soul. He also recorded the album Black Magic with that label and both albums went on to be inducted into the Blues Hall of Fame Classics of Blues Recordings – Albums category. Sam, himself was posthumously inducted in 1982.

2. Derek and the Dominos with Skydog

December 1st, 1970: The only known live appearance by Duane Allman with Derek and the Dominos took place at Curtis Hixon Hall in Tampa, Florida. The set started with an eight minute rendition of “Layla” and Allman played the other seven songs that night as well, with the band consisting of Eric Clapton, Bobby Whitlock, Carl Radle and Jim Gordon. The performance was caught on tape and released as a bootleg album entitled Derek & The Dominos With Skydog: Soul Mates Twin Flames.

December 2nd, 1949: Boogie-Woogie pianist Albert Ammons died in his hometown of Chicago, Illinois at the age of 42. Ammons grew up learning piano from his parents who were both pianists and developed this boogie-woogie blues style with long time friend, Meade Lux Lewis. Together they played the clubs and house parties and although Ammons recorded for Decca Records in 1936, it was in 1938 when he appeared at Carnegie Hall in New York with Lewis and Pete Johnson at John H. Hammonds From Spirituals to Swing event that he was noticed by the owner of Blue Note Records, Alfred Lion, and began recording there. He performed as a solo act and as a sideman for Sippie Lewis and Lionel Hampton and even played the inauguration of President Harry S. Truman. His influence has been felt through the music of artists such as Jerry Lee Lewis, Dr. John and Katie Webster.

December 3rd, 1949: The “Godmother of the Chicago Blues”, Theresa McLaurin Needham opened a club in the basement of an apartment building on South Indiana Avenue in Chicago, naming it simply, Theresa’s Lounge. It also came to be known as T’s Basement. Needham was born in Meridian, Mississippi and moved to Chicago with her husband in the 1940s. Although most of the patrons were African Americans from the neighborhood, the renown of the club was truly global due to the talent that she booked there. Junior Wells and Buddy Guy were members of the house band and artists such as Muddy Waters, Howlin’ Wolf, Jimmy Rogers, Otis Spann, Little Walter, Otis Rush and Earl Hooker all came there to play. In 1983 the landlord refused to renew the lease and club moved and finally shut its doors three years later. Needham died in 1992 and was posthumously inducted into the Blues Hall of Fame as a non-performer in 2001.

December 4th, 1980: The group described as “the heaviest band of all time”, Led Zeppelin, officially disbanded after the death of drummer John Bonham on September 25th of that year. The British rock group made up of Bonham, Robert Plant, Jimmy Page and John Paul Jones and whose music was heavily influenced by (and sometimes directly stolen from) blues artists such as Willie Dixon, Howlin’ Wolf, Robert Johnson, Leadbelly, Bukka White and Memphis Minnie released a simple statement: “We wish it to be known that the loss of our dear friend, and the deep sense of undivided harmony felt by ourselves and our manager, have led us to decide that we could not continue as we were”. – Led Zeppelin

December 4th, 2006: Jimi Hendrix’ 1968 Fender Stratocaster with sunburst design was purchased by Texas book store owner, Bill Butler at Christie’s Auction House for $168,000. The guitar had been on display at the Rock and Roll Hall of Fame since 1996. Butler also purchased the guitar’s strap for $10,800 and a photograph of Hendrix and band members Noel Redding and Mitch Mitchell framed by two topless blondes for $5,400.

December 5th, 1912: Charismatic and influential blues singer and harmonica player, Sonny Boy Williamson II was born Alex Miller on the Sara Jones Plantation in Tallahatchie County, Mississippi. His actual date of birth is a matter of uncertainty as he claimed to have been born in 1899 and his gravestone, set by Trumpet Records owner Lillian McMurry, gives the date as March 11th, 1908. Williamson took his stage name from King Biscuit Time sponsor, Max Moore when he began playing the show on KFFA in Helena, Arkansas in 1941. Before that time he had traveled around Mississippi and Arkansas encountering and playing with artists such as Elmore James, Big Joe Williams, Robert Johnson and Robert Lockwood, Jr. In 1949 he moved to West Memphis, Arkansas and started his own radio station KWEM bringing James, Lockwood, Houston Stackhouse, Arthur “Big Boy” Crudup and many others there to play. He first recorded for Trumpet in 1951 and his contract was sold to Chess Records in 1955 when Trumpet went bankrupt. He wrote, recorded and performed quite prolifically with some of his best known songs, “Don’t Start Me to Talkin'”, “Your Funeral and My Trial”, “Nine Below Zero”, “Eyesight to the Blind” and “One Way Out” being covered by artists such as Muddy Waters, Junior Wells, Howlin’ Wolf (who as Williamson’s brother-in-law), The Allman Brothers, John Mayall, Rory Gallagher, Johnny Winter and Joe Bonamassa. Williamson died in his sleep of an apparent heart attack on May 25th, 1965. He was posthumously inducted into the Blues Hall of Fame in 1980.

December 6th, 1949: Huddie William Ledbetter, BKA Lead Belly died from ALS in New York City at the age of 61. He was born on the Jeter Plantation near Mooringsport, Louisiana and at the age of five settled with his family in Bowie County, Texas. A talented musician, he played guitar, piano, mandolin, harmonica, violin, and accordion and sang songs from Gospel to Country to Blues. Trouble seemed to follow him and did several stints in jail for charges ranging from carrying a pistol to murder. He was doing time in Louisiana’s Angola Prison Farm in 1933 when he was discovered by John and Alan Lomax. They recorded some of his songs for the Library of Congress and helped him receive an early release. Lead Belly worked as a driver for John Lomax, touring and recording at the same time until 1936. After another assault charge put him back in prison in 1939, it was Alan Lomax who came to his aid, raising money for his legal expenses and upon Ledbetter’s release, put him on his CBS radio show with the likes of Sonny Terry, Brownie McGhee, Woody Guthrie, and a young Pete Seeger. His songs about women, liquor, prison life, and racism have been widely covered. He was inducted into the Blues Hall of Fame in 1986 and the Rock and Roll Hall of Fame in 1988.

December 6th, 1983: Albert King and Stevie Ray Vaughan recorded live for CHCH television in Hamilton, Ontario, Canada for the show In Session. King decided to do the show when he realized that Vaughan was ‘little Stevie’, the ‘skinny kid’ that he let sit in when he played in Texas. The performance was mostly King’s songs but they did also perform Vaughan’s “Pride and Joy”. The album, In Session, was released on August 17th, 1999 and the performance was released on DVD on September 28th, 2010.

December 7th, 1903: Roosevelt Thomas “Grey Ghost” Williams was born in Bastrop, Texas. He got the name Grey Ghost by the way he would appear and disappear from gigs by traveling to dances and roadhouses in empty box cars with coveralls over his suit. A blues piano player, Williams first gained fame from a recording of his song, “Hitler Blues” which was broadcast on BBC Radio and received mention in Time Magazine in 1940. He became a regular in African American nightclubs and played throughout Texas. In 1965 he was recorded by archivist Tary Owens who tracked him down again 20 years later, retired and working as a bus driver in Austin. He convinced Williams, who was now 84 years old to begin playing again and also to record another album 5 years later. The City of Austin had proclaimed December 7th, 1987, as Grey Ghost Day, and he was inducted into the Austin Music Hall of Fame in 1988. Grey Ghost died in Austin, Texas on July 17th, 1996 at the age of 92 after a 70 plus year career in the blues.