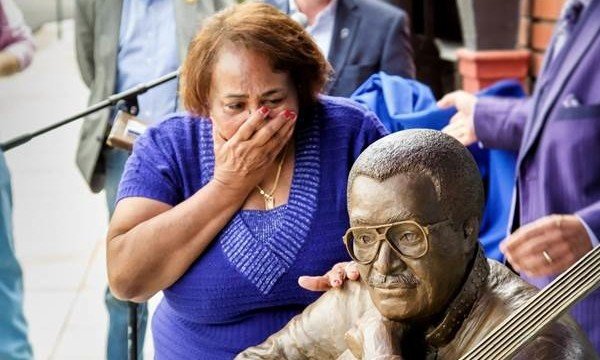 The statue, modeled after the cover art seen on Think of Me, Milton’s last studio album, is the creation of Memphis sculptor Andrea Holmes Lugar and was cast in bronze by her husband, Larry Lugar. The statue depicts Milton embracing his Gibson ES-335 guitar while seated on a “gar bench” — so-called because of the legs in the shape of gar fish found in the Mississippi River — found in Memphis area parks and created by the Memphis-based National Metal Museum. Funding was provided by Milton’s friends and admirers at the North Atlantic Blues Festival, held annually in Rockland, Maine. The festival is headed by Paul Benjamin who was in attendance. Both he and Mrs. Pat Campbell, Milton’s widow, addressed the crowd, as did Blues Foundation President & CEO Jay Sieleman.

The Blues Hall of Fame will occupy a 12,000 square foot site located at 421 South Main Street in Memphis directly across from the National Civil Rights Museum. The Blues Foundation recently moved its office back into that location after construction was completed to repurpose the space. Construction of exhibits continues at this time.

For the first time, the Foundation’s collection of artifacts and ephemera that relate to those who have been inducted, their music and chronicles of the milestones they achieved will be displayed and/or accessible to the general public. Some of the materials include virtually priceless recordings, instruments, articles of clothing and writings associated with the legends who have been honored with induction.

Design, repurposing and renovations to the building and construction of exhibit areas are budgeted at $2.5 million. To date, the Blues Foundation’s ‘Raise the Roof!’ capital campaign has raised $2.9 million. The capital campaign is not completed as additional funds will help maximize the qualitative content of the exhibits such as film, artifacts and original art.

Approximately $850,000 has been donated by Memphis philanthropists and the remainder has come from blues fans around the world.