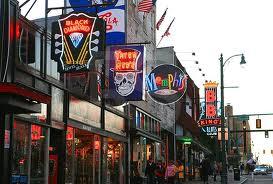 The B.B. King Beale Street Memorial is this afternoon at 12:45 CST, and American Blues Scene will be sending live coverage of the event, including video and images, through Twitter and Facebook. Just after noon, a procession including King’s body will move to Beale Street’s Handy Park for a tribute. King’s nickname came from his time in this city when he started being called “Blues Boy,” which was later shortened to B.B.