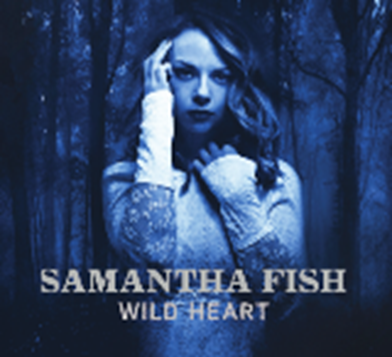 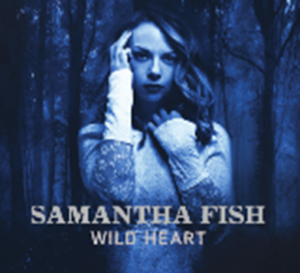 Kansas City blues guitarist/singer, Samantha Fish, has been working diligently on her third studio album, and that work has paid off in spades.

Wild Heart began with a trip to Nashville, Tennessee to work with Grammy winning songwriter, Jim McCormick. This was the first hint that something about this new album was going to be different from the hard-edged blues for which Fish is already famous. The first track, “Road Runner”, reminiscent of Miranda Lambert’s “White Liar” but with a more roots feel, will make fans sit up and immediately take notice.

Fish then enlisted Luther Dickinson of North Mississippi All Stars fame to produce the project as well as providing bass, mandolin, guitar and lap steel throughout. You can feel that hill country influence right down to your bones.

The slide guitar work on “Blame It On the Moon” is gritty and enticing and her cover of Junior Kimbrough’s “I’m In Love With You” which was recorded with hill country musicians Sharde’ Thomas (Othar Turner’s Granddaughter) and Lightnin’ Malcolm brings the live feel of a jug band session right into your ears. One of only two cover songs, the other being Charley Patton’s “Jim Lee Blues Pt. 1”, it reminds us that not all blues is electric and it didn’t all come from the Delta. These two covers were recorded at Zebra Ranch in Coldwater, Mississippi and if you pay close attention, you can almost hear beads of sweat dripping on to the floor and smell the magnolia blossoms on the summer breeze.

Almost every one of the twelve songs on this album was recorded in one or two takes without the use of distortion pedals or other gadgetry and Fish proves, beyond a shadow of a doubt, that they weren’t required. Her guitar work is overall tight and clean and her voice…oh her voice…has a weight and authority that belie her 25 years. These two facets combine perfectly on “Bitch On The Run” which takes us back to the blues-rock feel that made us fall in love with her in the first place. But even on this track the Gospel backing vocals, provided by Shontelle Norman-Beatty and Risse Norman, lend an ethereal quality which polishes the rough edge into a sleek, smooth gem. “Turn It Up”, “Show Me” and the title track are more indications that Fish hasn’t completely unplugged.

This is an almost live. Americana/Roots/Blues album of love songs from the road. Without one standard or shuffle in the mix, it was obviously a labor of love, recorded in four studios in Mississippi, Tennessee and Louisiana and even packaged in an old school style with the CD looking like a miniature LP (and yes you can even feel the grooves). Fish didn’t step out of her comfort zone, she matured into it and is letting everyone know that she won’t be pigeon-holed into a genre and that there is no taming her Wild Heart.