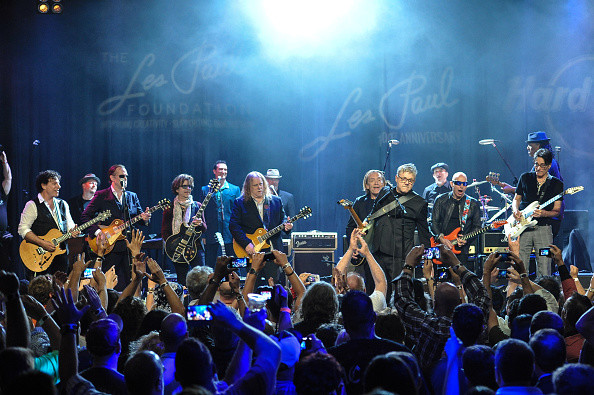 It was mighty fine to see the blues get respect both in the lineup and song choices of the Guitar Gods who celebrated Les Paul’s 100th birthday celebration at the Hard Rock Café in Times Square on Tuesday, June 9. Although, when Les Paul famously remarked, “I want a sound that has never been heard before,” he was probably not thinking of the unique cacophony created by Steve Vai’s supersonic pinch harmonics and Joe Bonamassa’s pentatonic shredding!

Nonetheless, that strange brew drifted up toward heaven when Vai and Bonamassa joined Joe Satriani, Warren Haynes, Neal Schon, Johnny A. and Steve Miller for the finale jam. The massive talents onstage did a great job, actually, of not stepping on each other’s superstar toes, thanks to nimble conducting by the musical director, SNL’s G.E. Smith. Vocally, they were led by Les Paul’s actual godson Steve “The Joker” Miller–who called out Freddie King’s “Tore Down.” The pantheon was still lumbering through it twenty minutes later, to the crowd’s immense delight.

By the time Les Paul passed away at 94 on August 12, 2009, his Monday night concerts at the Iridium on 51st and Broadway had become a pilgrimage for illustrious sit-in guests like Mark Knopfler, Paul McCartney and Keith Richards. I met him there, and he was as a kind and humble as could be. If you were a guitar player, you spoke his language—a language he still spoke very effectively even as his knuckles swelled with arthritis.

At Hard Rock, his Les Paul Trio – guitarist Lou Pallo, bassist Nicki Parrott and pianist John Colianni—opened the show, and made sure to perform “Sweet Georgia Brown,” the last song Paul ever played at his Monday night hang. Paul played Monday nights at the Iridium for nearly fifteen years, and his trio continues the tradition, with the likes of Jeff Beck and Robert Randolph filling in for Paul.

The morning of June 9, Journey guitarist Neal Schon accepted New York City’s “Les Paul Day” proclamation on behalf of the Les Paul Foundation. That evening, Schon was the first Guitar God onstage—and he brought his tone from the ‘80s, as he zoomed through instrumentals “NS Vortex” and “The Calling” with fierce shredding that was impressively competent, if a bit dated.

Johnny A. performed next wearing his signature Les Paul guitar, one of Gibson’s most popular models. Two instrumentals showcased his clean tone, clear phrasing and fine sense of melody—“And Your Bird Can Sing” and a touching “Wichita Lineman.”

After Johnny A., a buff Joe Satriani emerged with a grin to shouts of “Satch!” rocking a cleanly shaved head and wraparound shades. “Les Paul was the first guitar hero,” Satriani declared. He whizzed through “Satch Boogie” and a lovely “Always With Me, Always With You,” running his bright orange-red Ibanez signature axe through some Marshall stacks for a satisfyingly thick, present tone largely free of effects.

Satch was followed by the two blues/rock stars in the house, Joe Bonamassa and Warren Haynes. Bonamassa, pale and twitchy in his sharp black suit, brought his trademark intensity, precise shredding and sweep picking to Muddy Waters’s “All Aboard” and a charged-up “Double Trouble” by Otis Rush, while rocking his famous ’59 Les Paul Gold Top.

Haynes upped the ante, though, through the sheer force of his soul, standing stock still center stage as he played exquisitely felt and phrased guitar solos on Albert King’s “Feel Like Breaking Up Somebody’s Home.” Next, Haynes used his warm, rough-hewn voice to turn “Soulshine” by the Allman Brothers into a elegiac gospel hymn for Les Paul.

After Haynes took us to church, Steve Vai bounded onstage all angular limbs and floppy bangs and took the guitar to outer space. Vai flourished his patented pitch-shifted dive bombs on a frenetic, shred-tastic “Racing the World” and reached for a jazzier, melodic vibe on “Tender Surrender.”
During the finale, instead of the radio hits Steve Miller could have sleepwalked through, he chose old classics and did what his godfather would have done—invited players to sit in. On the Rudy Toombs tune “One Mint Julep,” he brought up Bonamassa and Satriani, who surprised with a flawless, simple, quiet blues solo. Miller called Haynes and Vai up for “Blues with a Feeling,” featuring New York City blues scene staple Jon Paris on harmonica.

The music continued into the early morning hours at a festive private party at the Iridium.

Booze flowed as our ears were pinned back by the Southern hard rock sound of Count’s 77 from Las Vegas, led by singer Danny “Count” Koker of HISTORY’s hit TV series “Counting Cars.” The band played a few originals, but the real excitement took hold when Earl Slick, Joe Lewis Walker, Lou Pallo, Joe Berger and Jon Paris arrived from the Hard Rock and took their turns onstage. It was a wonderful New York City night that Les Paul would have loved, worthy of becoming an annual tradition in his name.