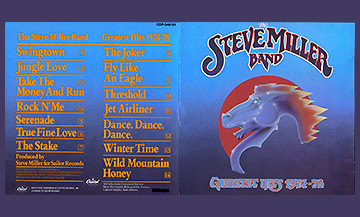 1.  Miller’s parents, both Jazz enthusiasts, were best man and maid of honor at the wedding of their friends; Les Paul and Mary Ford.  Paul taught the young Steve some chords on the guitar at age 5.

2.  Miller started his own band while still in prep school by teaching his older brother to play bass and helping classmate, Boz Scaggs, learn guitar.

3.  He was attending the University of Copenhagen in Denmark his senior year when he returned to the US and dropped out 6 credit hours from a literature degree to move to Chicago and play blues.

4.  When he first got to Chicago, he worked with Paul Butterfield and jammed with Chicago blues men, Muddy Waters, Howlin’ Wolf and Buddy Guy.

6.  Miller broke his neck in an automobile accident and subsequently developed hepatitis, which took him out of music for the better part of year.

7.  Miller allowed Shaggy to sample the bass line from “The Joker” for his hit, “Angel” and allowed Run-DMC to sample “Take the Money and Run” but successfully sued The Geto Boys when they used “The Joker” in a 1990 song.

8.  His 1976 album, Fly Like an Eagle and 1977’s Book of Dreams were both recorded at the same time, but released separately instead of as a double album.

9.  During the 2010-2011 school year, Miller served as an artist in residence at the University of Southern California’s Thornton School of Music.

10.  In a nod from the television show Friends, the character of Joey has an imaginary friend named Maurice, whose occupation is Space Cowboy.