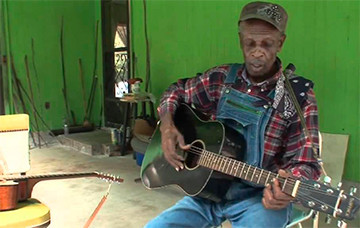 Born Lee Chester Ulmer on August 28th, 1928 in Stringer, Mississippi, he learned to play guitar by the age of nine from his father who often played with other area musicians including Jimmie Rodgers.  From that point on Ulmer began busking on street corners, playing picnics and fish fries and learning to play several more instruments including fiddle, mandolin and banjo.

He developed a slide guitar technique by studying his biggest influence, Blind Roosevelt Graves.  It wasn’t long before he was traveling to various other parts of the country and performing as a “12 Piece One-Man Band”.  Cities where he settled for periods of time included Kansas City, Missouri; Joliet, Illinois; Holbrook, Arizona and Hollywood, California where he not only played music but also worked on the railroad, ran his own automotive shop, operated a tow truck and worked construction.

During his travels, he met and played with artists including J. B. Lenoir, Elvis Presley, Les Paul and Mary Ford, Fats Domino, Muddy Waters, Elmore James, Howlin’ Wolf, Buddy Guy, Hound Dog Taylor and many others.  He also appeared at festivals world-wide including King Biscuit, the Chicago Blues Festival and the Roots and Blues Festival in Parma, Italy.

Ulmer settled back in Mississippi in 2001 and in 2009 was named Blues Artist of the Year by the Mississippi Delta Blues Society of Indianola.