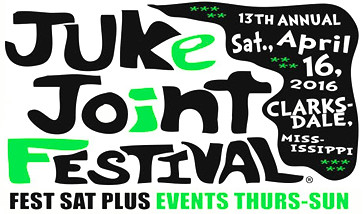 On the weekend of April 16th, Blues fans from around the world will gather in historic Clarksdale, Mississippi, the place many consider to be the home of the blues.  What circumstance brings true blues lovers from over 30 countries to the Golden Buckle on the Cotton Belt?  The 13th Annual Juke Joint Festival.

As Roger Stolle, music director for the Festival, says, “If you’re looking for a blues festival with headlining rock acts, that ain’t us.”

There are 13 outdoor stages scattered over 8 city blocks in Clarksdale offering non-stop, day time performances, absolutely free, with the main stage located at the Delta Blues Museum.  But that’s just the beginning.  Its called the Juke Joint Festival for a reason.  Entertainers will also be playing at some of the most famous “jukes” in the region, including Red’s Lounge, Messenger’s, Ground Zero, The Juke Joint Chapel at the Shack Up Inn and the Holy Moly to name but a few.  You can bet there will be plenty of folks busking the street corners and parks as well.

Wristbands for the Saturday night “Juke Crawl” that allow patrons to visit 20+ venues and 20+ acts are available, in advance, for just $20.00 and can be purchased at the official website: www.jukejointfestival.com They are $25.00 on the day of the event.

Most of the musical performances take place on Saturday, April 16th, but there is so much more to see and do.  On Thursday, there’s the official Kick Off party at Delta Cinema. Friday’s festivities include the  Ghost Riders, monkeys-riding-dogs, shows (10:45, 12:45, 3:30 & 5:30 PM) as well as a special Clarksdale appearance of Thacker Mountain Radio sponsored by Delta Regional Authority. Its a live, public music/literary event at the historic New Roxy (6-7 PM). Sunday its more free music with the Cat Head Mini Blues Fest (10-4 PM) and the Second Street Blues Party (11-5 PM).

Locals refer to the event as simply, “Juke Joint”, but co-organizer Nan Hughes says there is something for everyone.  “It’s half blues festival, half small-town fair and all about the Delta. From a 5K/8K run and arts & crafts exhibits to Southern food and kids’ stuff, we put our region’s best foot forward — above and beyond the music.”  Just to make sure everyone is included there are also parades, pig races, a motorcycle rally, children’s train and tours of historic Clarksdale, land of the crossroads and former home of Son House, John Lee Hooker, Junior Parker, Sam Cooke, Muddy Waters, Pinetop Perkins and many more.

If you’re looking for the real deal in a Delta Blues experience, and artists with names like “Super Chikan”, “Cadillac John” and “Gearshifter” get you excited then this is a must attend event. Our old friends Rev. Peyton’s Big Damn Band will be on hand as well as world-renowned artists Robert Kimbrough, Sr., Big George Brock, Cedric Burnside, Robert “Bilbo” Walker and dozens more, so book your rooms early and don’t miss a minute of the lucky 13th Annual Juke Joint Festival.