Yes, Punk Blues is a Thing and Jane Lee Hooker Proves it – "NO B!" 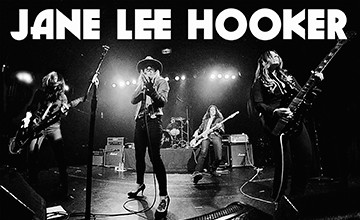 Strap yourselves in kids, its going to be a bumpy ride. The New York based punk blues band, Jane Lee Hooker, is releasing their debut CD, NO B! April 15th on the Ruf Records label.

We can already hear some old school blues purists screaming to high heaven and those of us whose first indoctrination into the blues came from Canned Heat, Johnny Winter and the Allman Brothers will be doing the same. But probably not for the same reason.

Jane Lee Hooker is a 5 member, all female, blazing blues/punk/rock tour-de-force made up of Dana “Danger” Athens on vocals; “Hightop” and Tina “T-Bone” Gorin on guitars; “Hail Mary” Z on bass and Melissa “Cool Whip” Houston on Drums. They are not just some girl cover band. They are a caucus of chicks hell bent on paying homage to the blues classics they grew up on, and doing it their way, with not a single apology.

NO B! starts out in 3rd gear with a version of “Wade in the Water” that not only gets your attention, but grabs you by the shirt collar and threatens to shake you loose. From there its a no-clutch, speed shift up into Winter’s “Mean Town Blues” that does the Texas master proud.

If you’re interpreting punk to mean lawless, shrieking, unintelligible noise, then your connotation needs refining in their case. These are master musicians with a powerhouse vocalist practicing their craft. Are they truly steeped in the blues? Since they gave instructions that they wanted this debut album to sound like Muddy Waters’ Hard Again, then we’d vote a resounding yes!

Ten of the eleven tracks are modern overhauls of songs straight from some true authorities. They move adeptly from dance hall rockers like “Didn’t it Rain”, “The Hunter” and “Shake For Me” to late night, juke joint, belly-rubbers “Bumble Bee” and “Free Me”. Their take on “Mannish Boy” and “Champagne and Reefer” are absolute Chicago, slathered with New York attitude.

Just to show that they are no slouches in the songwriting department, the band strategically placed a sweet, original shuffle, “In the Valley”, smack dab in the middle of the mix.

Speaking of the mix, veteran producer and engineer, Matt Chiaravalle, recorded this project in the most minimalistic and gritty possible way. The band plays live, with no effects. What they play is what we hear, period. You can crank up the speakers, close your eyes and be front row at their live performance; minus the screaming crowds, of course. Our only complaint is that, at times, the magnificent bottom provided by “Hail Mary” gets lost in the background, while on other tracks it threatens to shake the fillings out of our teeth.