10 Things You Didn't Know About the Memphis Jug Band 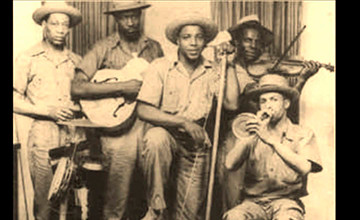 1.  The original Memphis Jug Band was formed in 1925 by multi-instrumentalist, Will Shade aka Son Brimmer.  He played guitar, washtub bass (also known as a “bull-fiddle”) and harmonica.  The other original members included Lionhouse on jug, Tee Wee Blackman on guitar and Ben Ramey on kazoo.

2.  Shade was a talented harmonica player and influenced artists such as Big Walter Horton, both Sonny Boy Williamsons and Charlie Musselwhite; however he used the name Memphis Jug Band throughout his entire career.

3.  The membership of the band could change daily depending on where they were performing and other names used include the Picaninny Jug Band, Memphis Sanctified Singers, the Carolina Peanut Boys, the Dallas Jug Band, the Memphis Sheiks and the Jolly Jug Band.

4.  Members of the Memphis Jug Band who went on to successful careers on their own include Charlie Burse, Memphis Minnie, Charlie Pierce, Hattie Hart, Minnie Wallace, Will Weldon and Vol Stevens.

5.  The Memphis Jug Band made the first phonograph recordings in the city of Memphis on February 24th, 1927 on the fourth floor of the McCall Building for the Victor label.  Their first recording was “Sun Brimmer’s Blues”.

7.  Although their records were marketed for black audiences, they were very popular among white crowds as well, playing political conventions, picnics, country club events, parties at the Peabody Hotel and traveling as far as New Orleans and Chicago to perform.

8.  During the late 1950s and early 1960s several field recordings were made of Shade and whatever other members he could gather.  Many times this included previous rivals in the music business like Gus Gannon and Furry Lewis.

9.  They were a favorite of Memphis politician and former mayor, Edward Hull “Boss” Crump and played several parties for him; one of which was photographed for Life magazine.  This is the same E.H. Crump for which W.C. Handy wrote the song, “Boss Crump” during Crump’s bid for mayor of Memphis and Frank Stokes wrote the song, “Mr. Crump Don’t Like It”.

10. During their heyday from 1927 to 1934, the band recorded over 80 commercial sides.  Shade’s wife, Jennie Mae Clayton, sang on many of the early recordings as well as some of the last field recordings at their home in Memphis in the mid-1960s.