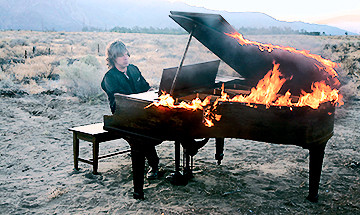 Emerson was best known for his tenure with the ’70s prog-rock super-group Emerson, Lake & Palmer, who along with acts like Yes, Genesis, and King Crimson, ushered in an genre of rock that blended elements of rock, jazz, and classical music together into often improvisational live performances. Formed in 1970, the group was signed by Ahmet Ertegun, the president of Atlantic Records, before they even had a record out. He had believed that the band would sell records because they were selling out arenas even though they had no recordings out yet.

Indeed, the band did sell out arenas, and they would continue to do so for many years to come. Emerson began his love of the Hammond and Moog as a teen, and went on to become one of the great virtuosos of his generation. Emerson’s adventures began with his time in the Keith Emerson Trio, John Brown’s Bodies, Gary Farr and the T-Bones, The V.I.P.’s, and The Nice. He and Greg Lake would form Emerson, Lake & Palmer in 1970 after approaching and securing Carl Palmer’s talents for their own. From the time they performed their first gig together on 23 August 1970 at the Guildhall in Plymouth, they knew they had something different. Their live performance at the Isle of Wight Festival on 29 August that year merely confirmed their beliefs.

ELP would dissolve and reform several times. They toured during the ’90s, and in April of 2000 Emerson and Lake would tour North America performing acoustic versions of their work. Later concerts included a one off 40th anniversary concert on 25 July 2010, later released as the double-CD live album High Voltage.

A statement posted on Carl Palmer’s website reads, “I am deeply saddened to learn of the passing of my good friend and brother-in-music, Keith Emerson. Keith was a gentle soul whose love for music and passion for his performance as a keyboard player will remain unmatched for many years to come. He was a pioneer and an innovator whose musical genius touched all of us in the worlds of rock, classical and jazz. I will always remember his warm smile, good sense of humor, compelling showmanship and dedication to his musical craft. I am very lucky to have known him and to have made the music we did together.”