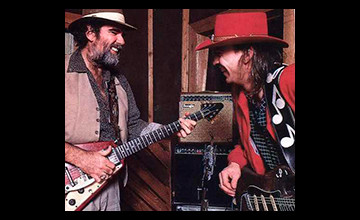 Smithville, TENNESSEE – Groundbreaking guitarist and vocalist Lonnie Mack, a pioneer of rock and blues guitar died on April 21, 2016 of natural causes at Centennial Medical Center near his home in Smithville, Tennessee. His early instrumental recordings – among them Wham! and Memphis — influenced many of rock’s greatest players, including Eric Clapton, Duane Allman, Keith Richards, Jimmy Page and especially Stevie Ray Vaughan. He was 74.

Rolling Stone called him “a pioneer in rock guitar soloing.” Guitar World said, “Mack attacked the strings with fast, aggressive single-string phrasing and a seamless rhythm style that significantly raised the guitar virtuoso bar and foreshadowed the arena-sized tones of guitar heroes to come.” The Chicago Tribune wrote, “With the wiggle of a whammy bar and a blinding run of notes up and down the neck of his classic Gibson Flying V, Lonnie Mack launched the modern guitar era.”

Mack’s influences included rhythm and blues, country, gospel and rockabilly, and his work continues to be enjoyed and revered by successive generations of guitarists and fans. He recorded a number of singles and a total of 11 albums for labels including Fraternity, Elektra, Alligator, Epic and Capitol.

Lonnie McIntosh was born on July 18, 1941 in Harrison, Indiana, about twenty miles west of Cincinnati. Growing up in rural Indiana, Mack fell in love with music as a child. Starting with chords he learned from his mother, by the time he was a teenager he’d begun working in roadhouses, joints, and clubs having dropped out of school. He bought the Gibson Flying V guitar he would become known for in 1958, serial number 7, and slapped a tremolo bar on it. after the album Wham!,  the tremolo bar would become known as a “whammy bar.”

With time and exposure, Mack was booking hundreds of gigs a year all over the country. A 1968 a Rolling Stone article stimulated new interest in his music. He signed with Elektra Records and cut three albums. He began playing all the major rock venues, from Fillmore East to Fillmore West. Lonnie also made a guest appearance on the Doors’ Morrison Hotel album. You can hear Lonnie’s guitar solo on “Roadhouse Blues” preceded by Jim Morrison’s urgent ‘Do it, Lonnie! Do it!’ He even worked in Elektra’s A&R department. When the label merged with giant Warner Brothers, Lonnie grew disgusted with the new bureaucracy and walked out of his job.

Six years later Mack signed with Capitol and cut two albums that featured his country influences. He played on the West Coast for a while and even flew to Japan for a “Save The Whales” benefit. After a series of adventures, Mack eventually returned to Indiana. He re-emerged in 1982.

At Stevie Ray Vaughan‘s urging, he relocated from southern Indiana to Texas, where he settled in Spicewood. He began jamming with Stevie Ray (who proudly named Wham! as the first single he owned) in local clubs and flying to New York for gigs at the Lone Star and the Ritz. When Alligator Records approached Lonnie to do an album, Vaughan immediately volunteered to help him out. The result was 1985’s Strike Like Lightning, co-produced by Lonnie and Stevie Ray and featuring Stevie’s guitar on several tracks.

Mack’s re-emergence was a major music industry event. Keith Richards, Ron Wood, Ry Cooder and Stevie Ray Vaughan all joined Lonnie on stage during his 1985 tour. The New York Times said, “Although Mr. Mack can play every finger-twisting blues guitar lick, he doesn’t show off; he comes up with sustained melodies and uses fast licks only at an emotional peak. Mr. Mack is also a thoroughly convincing singer.”  Other celebrities — Bob Dylan, Mick Jagger, Paul Simon, Eddie Van Halen, Dwight Yoakam and actor Matt Dillon — attended shows during the Strike Like Lightning tour. The year was capped off with a stellar performance at New York’s prestigious Carnegie Hall with Albert Collins and the late Roy Buchanan. That show was released commercially on DVD as Further On Down The Road.

Mack recorded two more albums for Alligator, 1986’s Second Sight and 1990’s Live! Attack Of the Killer V. In between he signed with Epic Records and released Roadhouses And Dancehalls in 1988. Mack continued to tour into the 2000s. He relocated to Smithville, Tennessee where he continued writing songs but ceased active touring. In 2001 he was inducted into the International Guitar Hall Of Fame and in 2005 into the Rockabilly Hall Of Fame.