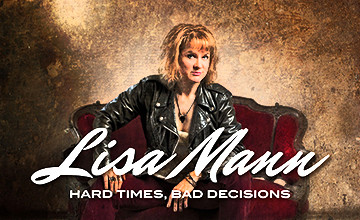 Lisa Mann’s 2014 breakout CD Move On led to increased national and international recognition of the Portlandian’s voluptuous vocals and mastery of the six-string bass. In short order, she won the 2014 Sean Costello Rising Star Award at the Blues Blast Awards and the 2015 Blues Music Award for Bassist of the Year.  With her new recording Hard Times, Bad Decisions, which drops in May, she continues to demonstrate the depth of her songwriting and performance abilities through twelve songs, eight of which are originals.

As is her custom, Lisa showcases legendary Oregon artists alongside her own Really Good Band (Jason “JT” Thomas on guitar, Michael Ballash on drums, and Brian Harris on keys) as well as featuring some musicians you might not expect to hear on an independent blues artist’s recording. Vinny Appice (Black Sabbath, Rick Derringer) contributes the drumming track on one cut, Renato Caranto (Esperanza Spalding, Merle Haggard) plays saxophone on another, and Chris Mercer (John Mayall’s Bluesbreakers, Pretenders) blows sax on two songs.

Running through several of the songs on Hard Times, Bad Decisions, there is a karmic theme, a product of Lisa’s Buddhist beliefs. “We’re in the stream of cause and effect; we can’t extricate ourselves from that – we have to learn how to navigate it,” she explains. As one example, the title cut presents the story of how one woman’s bad choices resulted in her life of prostitution.

“Hard times are not our choice, but the bad decisions are within the realm of choice,” Lisa says. “This is about the balance between the karma you inherit and the karma you create. You can do something about that.”

In “Judge a Man Forever,” Lisa addresses the Ban-The-Box Campaign which is a movement to persuade employers to eliminate questions such as, “Have you ever been convicted of a felony?” from job applications. “Judge a man forever by the worst thing he’s ever done,” Lisa sings. This issue is important, she explains, because, if people cannot gain legitimate employment after prison, they are likely to return to the easier and illegal means that got them into trouble in the first place.

The chain-gang rhythm and tempo of that song are represented through Ben Rice’s Resonator licks and Vinny Appice’s drumming. Lisa offers to donate use of the song for any charitable or documentary uses related to the Ban-the-Box movement.

Another social consciousness-related track is Lisa’s rendition of “I Love You All the Time,” a song written by the Eagles of Death Metal, the band that was performing at the Bataclan last year during the terrorist attacks in Paris. The band, whose merchandise seller Nick Alexander lost his life during the attack, is donating the publishing rights every time an artist covers the song to benefit Nick and other victims. Participants in the fund-raising effort include Elton John and Florence and the Machine. For further information please check here.

Naturally there are lighter tunes on the record, including “Doghouse” which features the barking skills of Portland vocalist Rae Gordon. “Rae can sing her face off AND bark like a dog,” Lisa laughs.

“Two Halves of a Broken Heart” features Lisa’s vocal duet with Andy Stokes, “Oregon’s King of Soul,” and a rousing organ track by Louis Pain, “Portland’s boss of the B-3.” “I usually would not put a ballad as the second track,” Lisa remarks, “but the performances were so strong I thought it should be the second song.”

Portland favorites round out the remainder of the CD. The guitar prowess of Portland favorite Sonny Hess is featured on “I Go Zoom,” a swinging number penned by jazz artist Mary Kadderley. The New Orleans sounding “Ain’t Nunna Your Business” highlights Louisiana native Steve Kerin on keys.

Lisa, who is again nominated this year for the Blues Music Award for bass, hosts the CD release party at Portland’s Rose Bar & Grill on May 13th and will then embark on her first tour in the United Kingdom in July. Fans can order the CD through her website.