These 2016 Blues Hall of Fame Inductees Are Proud and Grateful 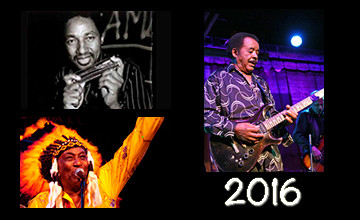 May 4th will see the 2016 inductions into the Blues Hall of Fame in Memphis, Tennessee. This year’s inductions in the Performers category will include among others, two legends of the blues, Eddie Clearwater and Jimmy Johnson. Also to be inducted to the great hall this year is the 1955 single by Billy Boy Arnold on the Vee-Jay label, “I Wish You Would.” Arnold was inducted as a performer in 2012.

Eddy “The Chief” Clearwater has been making records since 1958. In the beginning, he would become recognized in venues throughout the European continent, and of course, the city of Chicago. In time, he became one of the hardest working musicians on the Chicago club circuit. Over the years he has recorded for many labels including Rooster Blues, Blind Pig, Bullseye Blues, Alligator, and his own Cleartone label. Audiences still pack venues to see him perform his high energy shows.

Jimmy Johnson heard plenty of gospel and blues growing up in Mississippi. During this time, Matt “Guitar” Murphy would be his best friend. Over the years he has played with Bobby Rush, Otis Clay, and later, he played in Jimmy Dawkin’s band. He’s also played with Freddy King, Albert King, Magic Sam, and so many more. He’s recorded for many labels including the French label MCM, Delmark, and Alligator.

Billy Boy Arnold was inducted into the Blues Hall of Fame in 2012. One of the youngest recording stars of 1950s Chicago, he was recording impressive blues for the Vee-Jay that included “I Wish You Would,” and “Rockinitis.” Later, he would play harp on the Bo Diddley classic “Bo Diddley,” backed by “I’m A Man.” As time moved on, his songs were covered by the likes of David Bowie, the Yardbirds, and the Animals, to name just a few. This year, his song “I Wish You Would” is being inducted into the hall.

American Blues Scene was able to spend a little time with these three legendary musicians recently. Here’s what they had to say.

What does it mean to be inducted into the Blues Hall of Fame with this year’s inductees?

These are the people I respect a lot, and I have been friends with for a lot of years, so I feel like I am in good company. I’ll tell you what it feels like: It feels like all these years I’ve been working and doing shows and traveling, trying to make people happy and trying to give them music and love, I feel like I’m receiving some of it back. In other words, like my grandmother used to say, ‘Remember, it’s better if you can get flowers while you can still smell them.’ So, while you’re still alive, it’s really good to be recognized and get some recognition. I can keep on giving – I love to give! It’s really great to receive something back from what you give. So, it’s a good feeling.

Billy Boy Arnold [His song “I Wish You Would” is inducted this year]:

Well it means that – I feel like I’m somebody, if you wanna look at it like that. I’m very honored that I made it in before I kicked the bucket. I haven’t made it in yet – it’s a few more days. Looking forward to it, put it like that. It’s not left to me how I feel about myself; it’s left to other people. You could love yourself, but if nobody else like you, you probably ain’t gonna get anywhere. But, you have to like yourself. I feel like I have the quality, as far as that goes.

What is your most treasured or favorite musical memory?

One of the best memories I have is when I first went to Europe in 1976, with Buddy Guy, Junior Wells, and Jimmy Johnson. It was my first time going to Europe, and I had such a wonderful time. We were there for 21 days; a 21 day tour is what it was. It was really a highlight in my life, and in my career. It was unforgettable. In fact, Hubert Sumlin was also on the tour.

He was the man!

When I played with Bo Diddley. I played on his first recording session. That was one of the highlights. I was just a youngster and I appreciated the opportunity. He was one of the originals.

This would be one of the tops right here. Some of the others? You might say I was very honored to get to play on the stage with B.B. King and James Brown. Also, a lot of the jazz greats; I got to get on the stage with Lionel Hampton, and Kenny Burrell.

Y’all are still touring. What are your plans? Will you slow down, stop, or maybe retire?

I just came back from Nebraska last week.  Lincoln and Omaha. In a couple of weeks I’ll be going out to Calgary, Canada, and also to Las Vegas, and Phoenix, Arizona also. Well I keep going because it keeps me going, and yes, it keeps me fresh. I have slowed down from what I used to do in the seventies, eighties, and the nineties. I was touring non-stop then. I’m doing less now, but it feels good to get on the stage and do it. As long as I have the health and strength, I want to continue to do what I love to do ‘cause it’s more than just a job to me, it’s a way of communicating with people. It makes me very happy to be onstage.

Well, I slowed down in 2004. It wasn’t so much slowing down as much as just I got kind of tired running up and down the road and wasn’t really getting rich. I started playing solo, and it took me a few years to kind of get into it and get it down. I played a lot of gigs. I made way more money up and down the road. I have bands in different places. I play with one in San Francisco, one in Denmark, and I have another band I play with in France, and I make money. I don’t have to carry a band. That’s what I’ve been doing lately, and I don’t usually do long tours. [Local gigs are so much easier] especially when I do solo, because I sit down to play, and I don’t have all this noise behind me and I just sing and play, and it’s real easy. It takes a little doing to get it down and really do it.

What do you think the blues community as a whole can do to gain more exposure for the blues? How do we get the younger audience more involved with the blues?

Playing festivals and shows. A lot of the young people be there with their families, and that’s how a lot of the young musicians hear somebody and they say ‘Oh wow! I’d like to do that.’ That’s how it’s passed on. Like they’ll go and see a Robert Cray show,  a B.B. King show, a Albert King show, whatever, you know? They say ‘I wonder can I do that?’ That’s how I did it. I heard records, and I said, ‘I wonder can I do that?’ It just goes on from there. It’s a calling. If you have a calling, and you’re at a show, whether it’s a blues show or any show, you have a calling for a type of music, well then, you know, you’ll pursue it. That’s how musicians come on the scene all the time. Younger people, you know.

Well, we have a lot of the real blues players, which I would say is the brothers. The Caucasian people, they play, but it’s – well most of the time it’s totally different. Don’t none of our young brothers really, well a few, but it’s not enough of them, to really keep our kind of music alive. The young people now, they want to get off into rap; that’s a quick way of getting fame and making a dollar. And, the system will give that more respect than they will blues.

It is what it is! They respect it more than they do blues. Blues just don’t get no respect! It’s hard to get sponsors to sponsor blues; they won’t sponsor it. That’s where the money comes from – sponsors! I mean, how you gonna like something if you don’t hear it? If you have a radio show, and you got sponsors, you have to play what they say play; you can’t play what you want to play. Only public radio plays what they wanna play, and they don’t go nowhere but across the street.

You said the magic words. We need the younger people. That’s what’s gonna escalate it to the next level. The people that are coming along now that’s much younger, they’re going to continue doing what we’ve set out to do, like Toronzo Cannon, and Gary Clark Jr., and people like that.  They’re coming up and they’re putting a new edge on the blues, but they’re coming up with their own ideas for arrangements and so-forth, which is gonna go far. It’s going to really escalate this.