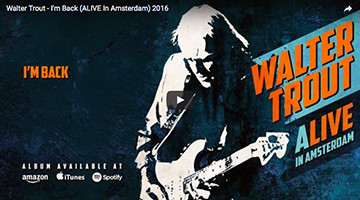 Walter Trout‘s recent performances have been setting a new standard for what a live show featuring inspiring guitar playing should be. Fans and peers alike have been amazed at the intensity, passion, and quality of Trout’s playing since he’s recovered from almost two years of fighting liver disease with the help of a last minute transplant.

Trout is back, he’s grateful, and it shows! These accomplishments come in spite of the fact that Trout had to learn how to walk, talk, and even how to play his beloved guitar, all over again from scratch. On June 17th Mascot/Provogue will release ALIVE in Amsterdam, recorded on November 28th, 2015 at Amsterdam’s opulent Royal Theatre Carré. The track “I’m Back” provides a peek at the performances that await fans on this exciting album.

This live album covers all five decades of Trout’s career with potent performances including the stinging Luther Allison cover “I’m Back,” to the plaintive B.B. King tribute “Say Goodbye To The Blues.” Other high points are the rocker “Almost Gone” and the raucous “Tomorrow Seems So Far Away.”  Trout is joined by son Jon on the rousing “Rock Me Baby,” and fan favorite, “Marie’s Mood.”

Since recovering, Walter Trout has simply been a monster performer on stage, giving his fans every drop of emotion he has pent up within himself, and then some. He says of his live performances, “I get into the energy and the moment and the excitement of it all,” he says. “I think I’m a very different guitarist live…”