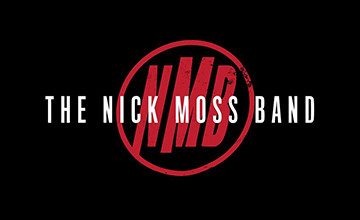 The Nick Moss Band is one of the best blues jam bands currently out in the wild.  Once again I found myself at the Tupelo Music Hall in Londonderry, New Hampshire, taking in some great live blues music. This night I was excited to enjoy The Nick Moss Band.  As usual, Nick Moss and his band-mates did not disappoint.

The first time I saw Nick Moss was back in May of 2012 at Rum Boogie in Memphis, Tennessee on Beale Street.  I was blown away by his guitar playing, and have been a fan ever since.  April 14, 2016 marked just the second time the Nick Moss Band has played at Tupelo, and I guarantee you it won’t be their last.  From the moment the band took the stage the audience of about 70 animated souls were one hundred percent invested in the music.

The band kicked off the evening with “Louise,” the second track off of the 2010 release Privileged.  This was followed by a number of tracks off the May 2016 double album release, From the Root to the Fruit.  These included the title track of the album, a true Chicago Blues sound with an added treat, featuring Nick Moss on the harp.  “Breathe Easy” was co-written by Moss and Ledbetter, showcasing Ledbetter’s vocals, and why he is one of the best in the business. “Before The Night is Through” the first track on disc one has a walking bass on the piano that perfectly accompanies  Ledbetter who provides the lead vocals.  This tune will should be a favorite among piano players, and fans of piano blues.  Taylor Streiff puts his heart and soul and fingers into every song he played during the show.

The highlight of the show was not the two encores that included special guests Mr. Nick from Mr. Nick and The Dirty Tricks on harp and Monster Mike on guitar, but a little more than half way through the show when the band played “Serves Me Right (Space Jam).”  During this song, bassist Nick Fane and drummer Patrick Seals gave the audience a night to remember with their impassioned solos; some of the best this venue has seen in a long time.

There is a reason why the Nick Moss Band is one of the premiere blues bands in the world, and when you see them live you will understand why.  I promise you, your ears will not be disappointed!