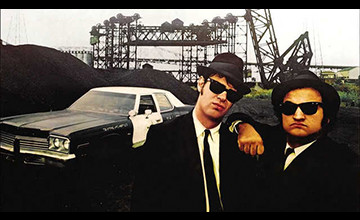 The Blues Brothers are coming back, soon. Dan Aykroyd, who played Elwood Blues, and John Belushi’s widow Judy, are co-creators and executive producers of a new Blues Brothers animated series. They are joined by Emmy winning SNL writer Anne Beatts.  The project is being developed by Bento Box Entertainment, who will produce the series and have begun shopping it around.

The new series will follow the adventures of Jake and Elwood Blues on the road again with the band. The show will also feature blues, soul, and other classic music, as well as new artists, blues legends, and more.

The 1980 movie The Blues Brothers cost an estimated $27.5 million to make and has earned over $115 million. The Blues Brothers began as skit on SNL in 1976, and appeared on the show as musical guests in 1978 with Dan Aykroyd as Elwood Blues, and John Belushi as “Joliet” Jake E. Blues. Not only has the movies since become a cult classic, it has turned two generations of young people on to the blues and the works of blues legends such as John Lee Hooker, and many others.