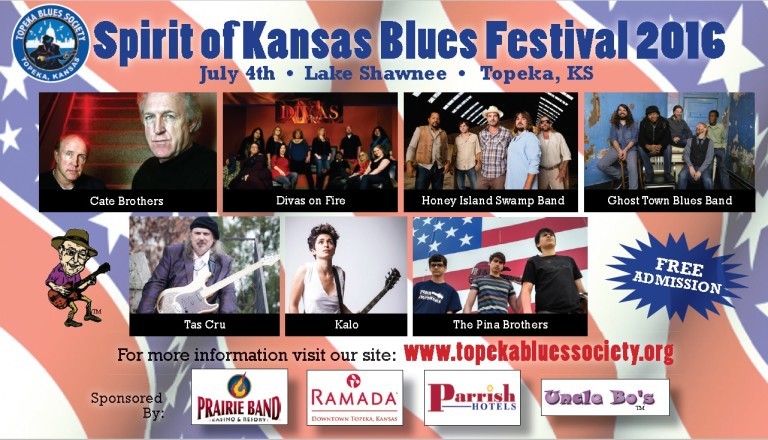 The Independence Day gathering is hosted by the Topeka Blues Society and takes place outside the Reynolds Lodge located at 3315 SW Tinman Circle at Lake Shawnee.  Music will begin at 11:30 am and last until sunset, when a spectacular fireworks display lights up the sky and reflects off the lake.

Each year, this patriotic event presents some of the top local and national blues acts, absolutely free to the public and this year’s lineup is no exception. Wichita, Kansas based family band, The Pina Brothers, opens the show with their tight-knit blues and rock ‘n’ roll.  These teenage brothers have already made two trips to the International Blues Challenge Youth Showcase and are crowd favorites everywhere they perform.

Blues/Rock/Americana/R&B group, KALO, fronted by Israeli-born guitarist and singer Bat-Or Kalo is sure to ignite the crowd into a dance frenzy as they’ve done all over the country since their semifinal appearance at the IBC in 2015.

Next up on the schedule is award winning artist and blues educator, Tas Cru with his Band of Tortured Souls.  From upstate New York, Cru is recognized as a blues poet on the festival circuit and, along with his six album releases over the last ten years, he has also released 2 CDs of blues specifically for kids.

Straight up from Beale Street comes the Ghost Town Blues Band with their tight harmonies, cigar box guitars, electric push brooms (yes you read that correctly) and uber-funky horn section.  If this crew doesn’t get you dancing in the grass, paramedics will be standing by to check your pulse.

Hot on the heels of their Demolition Day album, the Honey Island Swamp Band brings its “Bayou Americana” style to the Capital City. Formed ten years ago in San Francisco via New Orleans after the founding members were displaced by Hurricane Katrina, these guys pack a fresh, yet familiar flavor of blues, roots and soul wherever they’re cookin’.

The final two performances of the day come from closely associated Arkansas acts.  First up are Divas On Fire, a 10 piece group made up of 9 women and an honorary “Div-O” who bring smoldering six-part blues and soul harmonies to the forefront of their performance.  The connection becomes a bit more clear when you realize that one of the divas, vocalist Dawn Cate, is the daughter of guitarist Earl Cate of headlining act, you guessed it, the Cate Brothers.  Twin brothers Earl and Ernie have been thrilling audiences with their Southern country-rock and blues since they were teenagers hanging out with Ronnie Hawkins and Levon Helm in their hometown of Fayetteville, Arkansas. Over 40 years since their first recordings for Asylum Records, they are still a wildly popular touring act.

As always, the Spirit of Kansas ends with an all-star jam just before sunset when the fireworks take center stage.

Attendees of this one-day festival are invited to bring shade tents, coolers, blankets and chairs.  Food trucks, food tents and arts and crafts vendors will also be located nearby.  For safety reasons, no grills will be allowed on the festival grounds.