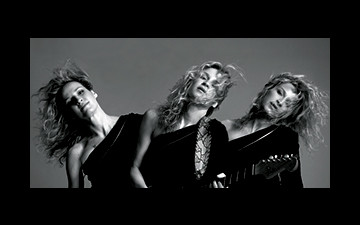 In just a little over four months, I was able to catch Ana Popovic as she once again journeyed through New England.  The first time was back in February at the Tupelo Music Hall, and the most recent were at Bull Run.  Both shows were phenomenal, with Ms. Popovic dazzling the audience with her talent on the strings, and her seductive vocals gaining numerous standing ovations.

The first show at the Tupelo Music Hall in Londonderry, New Hampshire back in February had a lot more tunes that fans have come to know and love over the years, while the second show had a lot of new material off of her most recent release, Trilogy.  Destined to be her masterpiece, Popovic played some new tunes from the three-disc album that received several standing ovations throughout the evening.

Although I had seen Ana Popovic many times before her show at The Bull Run in Shirley, MA, seeing an artist performing live with a new release is something every fan should experience.  You can feel the energy between the band members, and also, between the band and the crowd.

Before playing the first new material from the three-disc set that is Trilogy, Popovic told a bit of the history of the album. In addition to being seeing one of my favorite artists live, being able to hear them tell me about a song or album in person makes it that much more meaningful.  Ms. Popovic told us the history of one of her new songs “She Was A Doorman.”  This song is about a woman who owned a juke joint down south and wore many different hats.  She was the owner, the cook, the sound engineer and the bouncer. You name it she did it. The song was well received by the audience, and there was no doubt this new tune will be a favorite for years to come.

Other featured performances from the newly released Trilogy included “New Coat of Paint,” a  Tom Waits song that had fans dancing where ever they could find a flat surface!  Ms. Popovic went on to pay tribute to some of her favorite musicians, legends such as  Albert King and Jimi Hendrix.  Fans showed their love when the band played “Can’t You See What You’re Doing To Me” and “Can You See Me.”

Those who thought that those tributes to King and Hendrix were the closing numbers for the evening were surprised to find out that Ms. Popovic and company were just getting warmed up!  Slowing it down a notch with another new song off of Trilogy with “Johnnie Ray,” a ballad that tells the story of a romance that didn’t work out and probably should never have been.  Popovic wasn’t done paying tribute to blues greats; she played an amazing  Stevie Ray Vaughn medley. This was followed by “Going Down,” a Freddie King number that brought the house down!

The band finished out the evening with another medley, this time, featuring Hendrix songs, which of course no one objected to.  “Crosstown Traffic” was the anchor song with Popovic weaving some different Hendrix songs into the medley that had fans on their feet, chanting for more well after the song was over!

Ms. Popovic is one of the nicest people in the business,  a master guitarist, and a top tier singer-songwriter who always takes time for her fans. She will sign CDs and take pictures with them, or spend a few minutes to say a quick hello. If you have not seen an Ana Popovic show yet, you should. You should indeed.