Gary Hoey Kicks Up Some Dust, No Bones About It 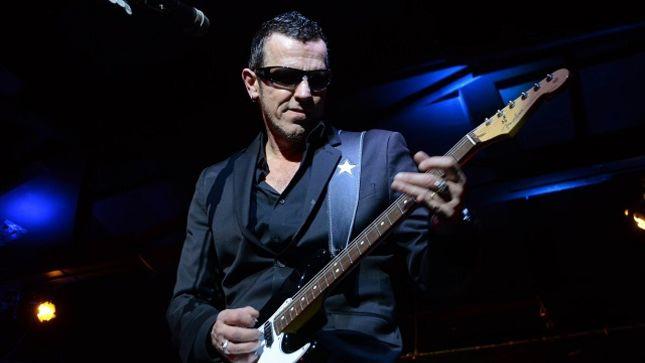 Gary Hoey, long known for his influential instrumental rock guitar albums is returning to his roots with the upcoming release, Dust and Bones. His 20th career album dives headlong into one of his first musical loves, the blues.

The virtuoso guitarist began coming full circle in his musical career a little over three years ago. That was when, through the use of a Kickstarter campaign, he got his fans’ response to the idea of a blues album. They responded in droves, and the album, Deja Blues was born.

“I did my last album,” Hoey says, “to prove to myself that I could play authentic blues, and now that I feel more at

home there, I felt it was time to mix my favorite guitar styles into something seamless, organic, and powerful.” This new creation, scheduled for release July 29th, on Provogue/Mascot Label Group is all of those things and so much more.

We’ll start with the fact that the album took a long time to create. Hoey shared the reason for that, “Only because I was waiting for the right music and right lyrics.” Wait. Did he say lyrics? By golly he did, and, according to him, that is also what makes this a landmark album in his eyes. Made up of 11 original tracks, only the final song, “Soul Surfer,” is an instrumental. The other ten cuts all feature his vocals as well as the blazing guitar he is best known for. His voice is strong, mature, and contains enough gravel to make it authentic.

The first track, “Boxcar Blues,” is described as Robert Johnson meets Led Zeppelin and begins with an electrified, open D-tuned, resonator guitar. His distorted, filtered vocals hit in just a few seconds with the opening lyrics, “Early in the morning,” done with a cry that is pure, vintage Delta. The vocal opening was the very first take, recorded at 3 am, and no matter how many times he tried, he couldn’t improve on it. “It was just so real,” Hoey explained, “and that’s what the blues is about.” When his Strat and rhythm section, made up of drummer Matt Scurfield and bassist AJ Pappas, kick in you’ll realize that the Johnson/Zeppelin illustration is spot on.

Dust and Bones isn’t just a return to the blues for Hoey, but also a platform from which to pay homage to some of his influences. The dance floor packing, “Who’s Your Daddy” is a nod to Brian Setzer, “This Time Tomorrow,” is a tribute to Robin Trower, and, his partner in rhyme, Lita Ford, makes a guest appearance on the power ballad, “Coming Home”.

His reverence is most sincere on the song, “Steamroller,” which is a tribute to the late, great Johnny Winter. The slide guitar work is phenomenal. “The Republic Highway 61 guitar that I was playing,” described Hoey, “has the smaller body, the cutaway, and I know they designed that for Johnny.” He continued, “When I went to get the tone, I wanted it to be Johnny, but I didn’t want it to be exactly Johnny. I wanted it to be more maybe what Johnny thought Robert Johnson and Elmore James would be doing. So, I went over to the amp, and I took the presence control knob, and I pulled the whole thing off. Robert Johnson did not have a presence control. Then I went over and turned all the treble off. Elmore James didn’t have a treble control.”

When describing how he channeled Winter’s unique vocal style, he explained that it was partly due to a fluke. His resonator guitar was perched right underneath his microphone stand so that when he sang, the vocals echoed through the reverb of the resonator and echoed back into the vocal mic. It creates a haunting sound that fits the song like a driving glove.

The other tunes are intentionally all over the board and make for an appreciable tour through the many sub-genres that are, today, recognized as the blues.

In all, this is a deep-seated blues rock album from an acknowledged guitar master. It’s a tribute album. It’s a musical journey through a landscape of genres. Most importantly, since Hoey has signed a multi-record deal with Provogue, it’s the beginning of what we hope is a long line of incredible things to come.