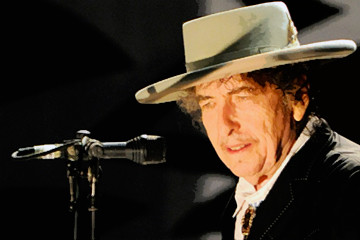 Bob Dylan is a bonafied legend, sure enough. Given that, at this point in his career, he’s pretty comfortable with who he is and where he’s at. Recently, at the world famous Greek Theater in Berkeley, California, Dylan and his band showed just how comfy he really is. Somewhere deep in the rear of the venue, a voice shouted out the inevitable “Free Bird.” Now, you might be chuckling and thinking to yourself, “Really? Dude! At a Dylan concert?”

However, for the artist known as “The Voice of a Generation,” the undoubtedly good-natured sarcastic request was no problem. Dylan and his band launched into a spirited “Free Bird,” much to the surprise of the audience. Originally written and performed by Lynyrd Skynyrd as a tribute to the fallen Duane Allman, the song has risen to the same mythic status as the currently embattled “Stairway to Heaven.” Dylan and company also played a number Frank Sinatra covers including “I’m a Fool To Want You,” and “All Or Nothing At All.” He performed other classics such as “Blowin’ in the Wind,” and “She Belongs To Me.”

Dylan, who has been touring with an incredible band, released his latest album, Fallen Angels in May. Later this year he is scheduled to perform at the Desert Trip super-fest, joining other legends The Who, Paul McCartney, the Rolling Stones, Roger Waters, and Neil Young.

Bob Dylan Fallen Angels The Greek Theater
Share. Facebook Twitter Pinterest LinkedIn Tumblr Email WhatsApp
Previous ArticleJimmy "Duck" Holmes – Treats Us to "It Is What It Is"
Next Article Gary Hoey Kicks Up Some Dust, No Bones About It