Remembering the Fillmore East – The Church of Rock and Roll 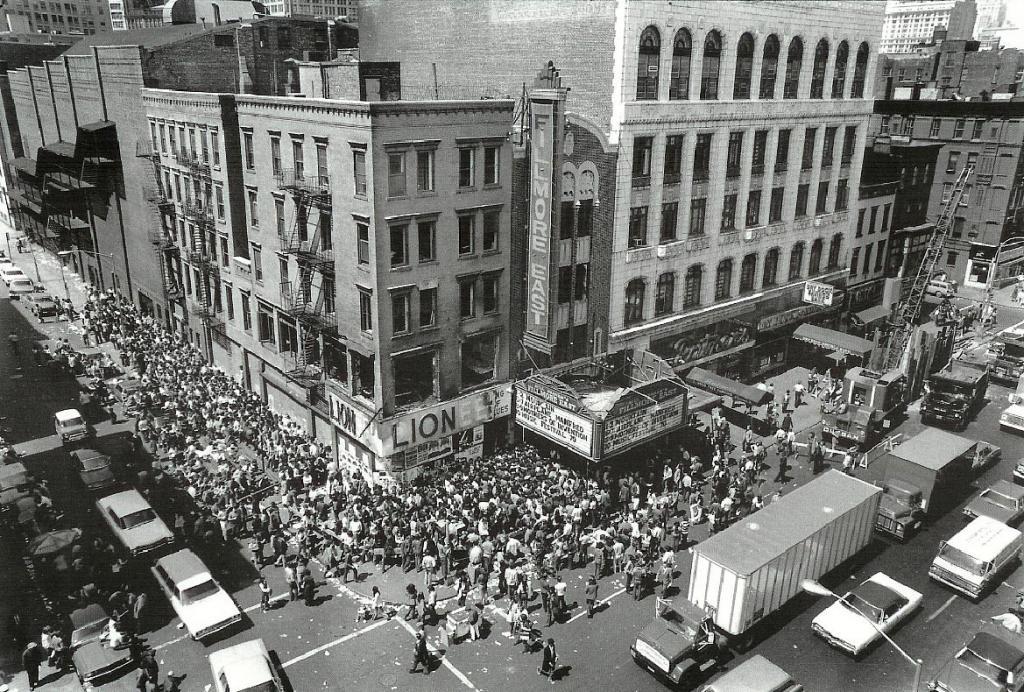 The legendary concert promoter, Bill Graham, had a grand vision. His dream included concert venues on both coasts that would be destination points for music lovers to see the greatest acts of their time. Graham was already running two venues in San Francisco. The Fillmore Auditorium sat on the corner of Fillmore Street and Geary Boulevard while the Fillmore West, formerly the Carousel Ballroom, took up residence at 10 South Van Ness Avenue.

He then set his sights on New York City. On the Lower East Side of Manhattan, now known as the East Village, sat an

already historic theater, The Commodore. Originally a Yiddish performance venue built in the mid-1920s, The Commodore had undergone some changes, becoming The Village movie theater and eventually falling into disrepair. It had a deceptively small marquee and entrance facade, but held almost 2,700 people when Graham took it over in 1967.

On March 8th, 1968, The Fillmore East opened its doors in grand style, with the first acts being Big Brother and the Holding Company, Tim Buckley and Albert King. Graham made sure that as many people as possible would see his shows by booking triple-bill acts for two shows each, several nights a week. Bands were booked, and expected to play shows at 8 pm and again at 11 pm on Friday and Saturday nights. He would also regularly alternate acts between his East and West coast venues.

An integral part of many of the shows was the addition of psychedelic art lighting projected on a backdrop behind the performers. The most renowned crew providing these effects was the The Joshua Light Show, created by electrical engineer and theater lighting student, Joshua White. His five person team used a combination of film, slide and overhead projectors, color wheels, water and oil colors and glass crystals to create a trailblazing liquid light show. So talented were these technicians and so popular their work, that they were often paid as much as headlining acts and received billing along with them.

However, it was the music that drew the attention and the sell-out crowds. It seemed that everyone from Frank Zappa to Howdy Doody creator, Buffalo Bob Smith played The Fillmore East. The location became so well liked that National Education Television brought their cameras out and recorded a show for broadcast in 1970.

The list of artists who played the Fillmore East reads like a who’s who of popular music. Jazz greats Miles Davis, Buddy Rich, Dizzy Gillespie and Nina Simone all played there. Early heavy metal band Black Sabbath, shared the same weekend stage as the J. Geils Band. One could see acoustic blues man John Hammond, Louisiana fiddle player, Doug Kershaw, and blues rock giants Ten Years After all in one night. Imagine, if you will, spending a June evening to witness Albert King and Chuck Berry open for The Who. The hodgepodge mixture of artists and genres on any given night was as much part of the charm as the near acoustic perfection of the facility.

Graham, master promoter that he was, didn’t leave out the blues fans. In addition to the “3 Kings” on various dates, Buddy Guy, Junior Wells, Bobby “Blue” Bland, Johnny Winter, John Mayall, Paul Butterfield, Luther Allison, Odetta, and a host of other blues giants took their turns on stage during the Fillmore’s three year run.

Of course there were groups who played there more than others. Taj Mahal played 8 shows at the theater, the Grateful Dead played a total of 43, and the blues dripping pioneers of southern rock, the Allman Brothers Band played so often that they became known as “Bill Graham’s House Band.” That, obviously, included the weekend of March 12th and 13th, 1971, when the Allman’s recorded their iconic, first live album, At Fillmore East.

They were not the only band to do so, however. The acoustics at the auditorium were so exceptional that no fewer than 33 bands recorded live albums there. Some of the more recognizable of these are Joe Cocker’s, Mad Dogs & Englishmen, Crosby, Stills, Nash & Young, 4 Way Street, Derek and the Dominos, In Concert, and Jimi Hendrix, Band of Gypsys.

Sadly, all things must end, and so it was when the famed Fillmore East held its last 3 days of shows, ending on June 27th, 1971. As stated earlier, guitar luminary, Albert King was on the bill for the very first show and he also played the very last, along with the J. Geils Band and the Allman Brothers. Special, surprise guests Edgar Winter’s White Trash, Mountain, Country Joe McDonald and the Beach Boys also performed at the invitation only performance, simulcast on New York radio stations WPLJ and WNEW. Stating financial reasons and a “need to find himself,” Graham forever closed the doors.

Although several investors tried to regain the glory days of the rock church, they were unsuccessful with both concert venues and nightclubs. The interior of the auditorium has been demolished and replaced with apartments, while the entrance lobby is now a bank. The only remaining indication of its former prestige is a small plaque, placed there by the Greenwich Village Society for Historic Preservation in 2014.