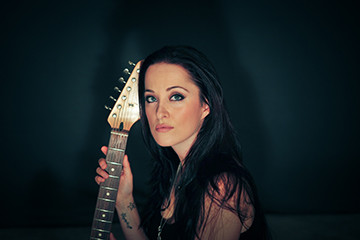 Long Road is the result of Rein’s being able to combine blues and rock seamlessly, not always the easiest thing to accomplish.  “Wild One,” is a stellar tune that exhibits in your grill guitar riffs, along with haunting vocals that have the listener playing along on air guitar!  One of our favorites is “Livin’ Loud,” a slow-grooving number with a dark beat, destined to have heads bobbing throughout the song.  An excellent example of the diverse sounds Rein packs on this latest release is “Green Light,” with guitar riffs that will become a favorite of her growing fan base.

“Rebel With A Cause,” has Rein showcasing her skills with phenomenal power chords that will have fans cocking an eyebrow.  Another favorite of ours is “Come Back Home,” a beautiful and haunting song has the listener enjoying the influence of Jimi Hendrix, along with a hint of the Doors classic, “Five To One.”  Here’s a song that recalls the first generation of classic rockers of the late sixties!

The closing track on the album, “Peace” begins with a sweet, melodic slow groove, and builds from there. Rein’s guitar playing throughout the song is pure beauty, and very soothing.  Listeners will revel as she channels her inner Stevie Ray Vaughn here.

Diana Rein is one of the blues world’s rising stars.  She has numerous fans on Youtube, where folks can watch her put a blues twist on works such as Taylor Swift’s “Shake It Off,” and more! On Long Road, Rein confirms she is a rare talent with the ability to capture the listener and hold them throughout the album. This album is a gem that should be in every blues fan’s music library. Be sure to get your copy today!