Language of the Blues: SLOW DRAG 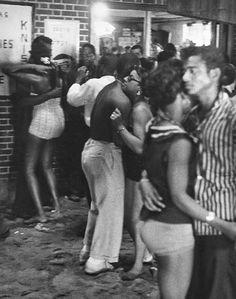 In The Land Where the Blues Began, musicologist and producer Alan Lomax described a party in the Delta countryside late one sultry summer night. The party was in a little wooden shack and “from it came a deep, powerful rhythm, as if someone were beating a huge drum yonder in the moonlit cotton patch.”

Once inside, Lomax realized the rhythm was coming from the shuffling feet of dancing couples glued together belly to belly, thigh to thigh, their arms wrapped tightly around each other’s necks. They were grinding their hips together slowly as they dragged their feet along the floor, doing a dance called the slow drag. The slow drag was also called “the blues.” There were other juke-joint dances like struttin’ (a more upbeat slow drag), the snake hips, the shimmy, and the funky butt, but after midnight it was all about the slow drag.

“Slowly, with bent knees and with the whole shoe soles flat to the floor, they dragged their feet along its surface, emphasizing the off beat, so that the whole house vibrated like a drum,” Lomax wrote. The dancers were moving to the music of a man playing guitar and singing the blues. At his side was a young boy dragging the head of a broom over the rough wooden floorboards in time to the bluesman’s beat.

The slow drag is the earliest known blues partner dance, dating from the early 1900s. Dragging the feet along the floor was a response to the prohibition Sanctified preachers laid down against dancing outside church walls.

This prohibition had its roots in the earliest years of slavery. Enslaved West Africans were rather shocked by such licentious European partner dances as reels and quadrilles, as West African dances did not involve holding a partner of the opposite sex so close. African priests who had been enslaved spread the word that their people were not to engage in any dance that involved crossing the feet in the style of European partner dances.

Africans–and, later, African Americans–worked around these prohibitions by shuffling or dragging the feet in rhythmic “non-dances,” such as the ring shout, the calenda, the chica, and the juba. African American preachers determined to keep their flock from the devilish temptation of courtship dances perpetuated the ban.

By gluing their feet to the floor, Saturday night slow drag dancers kept to the letter of the preachers’ edict, if not the spirit, while incorporating the undulating pelvic movements of African dance to dangerous effect.

“What Is Slow drag?”