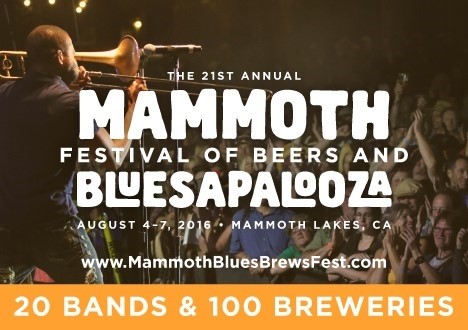 Imagine putting together all the best aspects of a summer blues festival. First of all, you’d want to hold it in a location that’s both beautiful and cool. There would definitely have to be some of today’s greatest acts performing there. The more days, the better, right? Great food, cold beer, and multiple stages are a must, and having other attractions in the area would be nice. Well, the 21st Annual Mammoth Festival of Beers & Bluesapalooza has all of that and more.

From August 4th through the 7th, 2016, “Mammoth” will take place at Sam’s Woodsite, in the scenic, mountain resort town of Mammoth Lakes, California. A stone’s throw from Yosemite National Park, in the picturesque Eastern High Sierras, its not just a typical “blues and brews” festival.

For those who like to rock out, The Stone Foxes, The Sheepdogs, and Zella Day will be on hand, while Tom Ball & Kenny Sultan, Keith Greeninger, David Jacobs-Strain, and others will grace the acoustic stage Friday through Sunday.

On the final day, the funk, rock, hip-hop and jazz infused “second line” group, New Breed Brass Band will lead the throng from the front gate to the main stage in what has come to be known as the Sunday Morning Hangover Parade.

Wondering why there is a hangover parade? It may be due, in part, to the 100 craft beer breweries that will be on hand. Beer tasting ticket holders will receive a shatterproof drinking vessel, (there is no glass allowed on the event grounds), and be able to sample each and every one of them. Beer and wine are also available for sale and there is even a cigar bar on the premises. For those who don’t imbibe, daily and multi-day tickets are available for the concerts only.

In close proximity are world-class golf courses, mountain biking and hiking trails, fishing, camping and resort facilities, making this a festival that truly has something for everyone. Tickets and additional information are available on the Mammoth website, just click the links below.

Mammoth Bluesapalooza enjoys a well-deserved reputation for presenting an amazing variety of musicians and musical styles from all over the world. Is this the perfect summer festival? Purchase single-day, multi-day, or 4 day VIP tickets and find out for yourself.